When rock singer Marty wilde and his wife Joyce moved into their thatched house in the Hertfordshire countryside they felt one thing was missing to complete their happiness. A baby.

They already had two children, Kim, now 19, and Ricky, now 18. But Joyce said: "We loved this house and its three-acre grounds so much we thought it would be an ideal setting to bring up another child."

Ten years after moving in the Wildes have that longed-for baby, Roxanne, now a bouncing seven-months-old. In the years between Joyce and Marty have known the heartbreak of losing five children, including twins, through miscarriage.

Joyce at 38 is still as pretty as when she first met Marty on his television show of 20 years ago, "Boy meets girl", when she was one of the singing Vernons Girls. As we sat with the family by a log fire she told me: "I became pregnant soon after we moved in here. As I'd had our first two children without worry, I did not expect problems."

"When I was in my fifth month we all went on holiday to Greece. We had not been there long when I realised something had gone wrong. I was flown by helicopter to an Athens hospital, where I lost the baby two weeks later. I attributed the miscarriag to having been too active, and without thinking too much about it I blithely became pregnant again soon afterwards. It came as a shock when I again lost the baby in the fifth month. I know I should have found out exactly why this was happening, but it was not until my fourth unsuccessful pregnancy that I became more cautious. when I was having twins I spent three months in hospital, but it happened agani - caused partly through the shock news of Elvis Presley's death. After this I went to a Harley Street gynaecologist who discovered that I needed a small operation on the womb. When Roxanne was born I had no problems at all. I was in labour only 20 minutes. In retrospect I am cross with myself for putting us all through so many tears unnecessarily. I should have been more thorough in my approach to childbearing."

Though 40-year-old Marty has never dropped from the limelight, there was a spell three years ago when work was not coming in so fast.

"At that stage I took a hand myself, and started to run my own show busniess agency from home", Joyce said. "Today I have 150 artists on my books, including Billy J Kramer, and have obtained all the engagements Marty can handle."

When Marty married Joyce at Greenwich 20 years ago it took 30 police and to mounted officers to control the 2,000 screaming fans waiting outside the church. The story behind their romance has an innocence which could have no parallel in today's sophisticated pop world.

Joyce recalled: "After seeing Marty on stage in my hometown, Liverpool, my girlfriend and I arrnage to go to the stage-door. We agreed that if he asked to take one of us home, the other would tactfully disappear. But there were hundreds of other girls there, too. I had to content myself with a piece of the shirt he threw down from his dressing room window.  I didn't meet Marty till I joined the Vernons Girls at 18."

Though many other stars of the day vied to date her, Marty was determined. "I knew immediately Joyce was the girl I wanted as my wife", he said.

Joyce took up the story again. "On our first date he took me to a Chinese restaurant. I had never been to any restaurant before, and the menu confused me. I ordered curry... I did not know curry was hot!"

Marty's marriage proposal was not the kind which figures in teenage fantasies. "He simply told me to go out with his mother and buy an engagement ring. But he did put that ring on my finger in a romantic way... to the tune of a tearjerking Presley record. We always adored Presley. Roxanne is the youngest member of his official fan club."

The Wildes' elder children are a credit to their parents. Blonde Kim sometimes sings professionally, but is mainly concentrating on her college studies, preparing for a BA degree in Fine Arts. Ricky plays keyboard with his father's band, the Wildcats, and is hoping to work soon with his own new-wave band. He has already recorded two of his own compositions.

Joyce said: "Our elder children behave very responsibly, and for Roxanne it is like having four parents .Everything has worked out so well that Marty and I now intend to have another baby. We always did want a family of four." 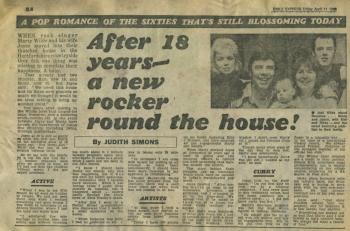