Dad was Marty, hero-figure to the decidedly more subdued boppers of the Fifties, so it was almost excusable that Ricky Wilde should pick up the thread almost 20 years later. "Dad's group was always practising around the house", says Ricky. "There was always someone bashing away on drums and I kind of got used to it. Then one day dad asked me if I wanted to sing and I thought it would be a good idea and I started with a song he wrote called 'I am an Astronaut'.

"I hear dad's songs all the time and I like stuff like 'Bad Boy', which will be on the new LP. And I ued to go to watch him at cabaret which was really interesting."

"Astronut" was Ricky's first single and he remembers the recording session as being slightly overawing. "All I remember is sitting in this black chair and they put the earphones on my head and then played it through and asked me which key was best for me to sing in. And when it was all decided I just sang away. It took about half an hour in all. I remember lots of big, gynormous things by the side of me, and windows and after I sang it through a few times it was all done. I'd been singing around the house for a while and in the school choir. Songs like 'Hickory Dickory Dock'... well at least I sing them in tune. We did other boring songs like 'The Cuckoo' and we do harmonies and other complicated things. My sister Kim - she's 12 - she also sings. But not on my album. You must be kiding. But she's making an album that will be out pretty soon. There are no others in the family. Just mum and dad. I haven't actually done a concert yet but there was the PA at Harlequin Record shop. That was incredible really because we were only expecting about two or three hundred. But there must have been about 700 there."

"I met Jonathan (King) through dad. Dad said you'll know him because he's the one with glasses. I suppose dad took a tape along to him at UK Records and I went along to see him. He made me sign a couple of contracts and we became good friends. We had a little chat. He said, 'How old are you? When were you born'. He wanted to see what I was like, you know."

"Right now, I'd really love to do a concert and I would not be a bit embarrassed, because we do school plays and they're all right. They laugh at me because I sometimes say the wrong words, but I don't really mind. Nothing's actually been settled yet, so, meanwhile, I'm listening to lots of records. I really like Kenny's 'Heart of Stone', and I like Simon (Turner); I think he's a good singer."

What does he think about his friend and rival? "I love Donny's voice. It's so unusual and it has a beautiful pitch. It's great."

Like he told us a couple of weeks ago, his only real problem at the moment comes from adoring young girls. "I've got terrible girl friend trouble at the moment. They come up to me and say, 'Who do you like, Jill or me?' And I say, 'Oh I like you best, of course'. And when Jill comes back I say the same to her. And you get round them that way. But sometimes I have to run away. They do nag you sometimes. It's not their fault. It's just the way they're made and they can't really help it. I took a girl friend to a disco once. We don't do anything exciting, except when they have a contest for the best dancers. I entered one once but we didn't come anywhere."

He plays both piano and guitar - not well enough to perform on records or at live performance, but it's coming along nicely. "I can do classical pieces on piano, like 'Minuet in C' and that sort of thing. I started at eight and gave it up for a while and started again at half past nine. I've bee playing guitar since 1969 and it's really my main instrument. It's a Spanish style one but it's being painted right now, so I have not practised for about a month. I just muck around really. I do regular pop songs and play a few chords and a bit of lead. But I won't be playing on the album. I'm not that good yet. Jonathan will be around all the time, anyway, so he'll know what the songs will need."

Has his world been shaken by all the attention? "I suppose it has really. I used to say, 'Hey can I have a game of football?' and they'd say, 'No, go away', now they say, 'Oh yes, of course, Ricky. Have the ball Ricky!' Yes it does irritate me a bit. A couple of people are jealous but most of them are not. But I won't mention any names." 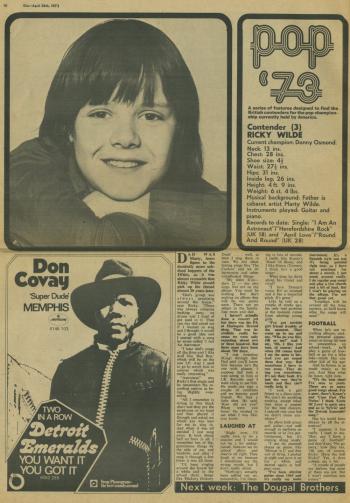