It took Kim Wilde only a few weeks to tame the charts with Kids in America and her latest blockbuster Chequered Love. ut she might just as well have walked off with the booby prize in a village beauty contest for all the effect it's having on her. The record soared to number two, the highest place her rock 'n' roller Dad, Marty ever reached. But, Kim readily admits she would have settled for 40 spots below. "I can't say I was really surprised it got that high. But I wasn't all that disappointed it didn't get to number one", she says.

"I was more than happy with what happened. Even if it had got to 42 I would still have been pleased. You see, I'm not terribly ambitious for the top spot. I'd rather stay around for ten years and be consistently good than have number ones for two or three. Success doesn't overawe me. I'm not over-excited by it. It's just given me an inner contentment. I don't have to try to be a singer any more. I am one, and that's what I always wanted."

Singer she may be, but when she turned up for our meeting - half an hour late because she nipped in to buy a music paper and missed the train - it looked and sounded as if she'd been hod-carrying all morning.

Puffing like a clapped out car, she rushed in apologising furiously. Her choppy, peroxide hair was strewn all over the place, she was snuffling with flu and her shortlength coat would have done a brickie credit. A cast-of from her mum, she says. Kim's clothes have become a bit of a side attraction to her music. She prefers men's because, she says, they fit better. And she does for Oxfam shops what a lot of bigger stars do for the plush London boutiques. Her red cardi under the mini coat had a distinctly second-hand look about it too. And it's not just me who comments on her wild looks... as her fan mail reveals.

"Most of my letters say how wonderful I am", Kim says "but one boy added in his letter: 'I wish you'd do something about your hair. You're really pretty but if you did something to your hair you'd be beautiful."

This time last year Kim was just another 19-year-old art school students with a handful of "O" levels under her belt and a yearning to sing. She got mixed up doing some demo tapes for her brother Ricky, 19, who took them along to top record producer, Mickie Most. With his usual knack of penning gold. Most pocked out Kids in America and Kim was on her way. Ricky co-wrote the song with 42-year-old Marty, the same double act as wrote the latest single Chequered Love.

Critics will argue, that with a famous father and a mother who was in the Vernons Girls, Kim was born with a silver tuning fork in her mouth. She was able to hum tunes while her contemporaries were only managing a gurgle on a good day. But it's a different name that seems to have sparked the fuse. Says Kim: "The only reference point I can remember is listening to Cilla Black's "Anyone who had a heart" in 1964. It had a very big impact on me at the time, which is quite something for a four year old."

Since then, her heroes and heroines in the music world have been an odd mixture. Connie Francis, Joni Mitchell, Elvis Costello, Aretha Franklin and Frank Sinatra, to name a few. Happy to talk about music, she is somewhat coy about her private life. "It becomes that much more precious when you're in this position. But put it this way, I'm not getting married. There are people I care about and I make sure I have time for them. But I won't say I was going out with anyone." she says.

She is refreshingly open about her love of babies, though. In the last 18 months, her family have had two new additions. Roxanne, named after the Police single, who is one, and Marty, born just a few weeks ago. "I love having the babies in the house. They give you the most pleasure out of anything you can ever enjoy. I'll definitely have some in the future. But that's a long way off yet. My mum's just had the last one at 39 so I've got a few years before I start panicking", she says.

For the next few months Kim will be staying at the thatched family home, along with the babies, the two cats and dogs. Next year with a few more records behind her Kim takes to the road with a band. Only then, when she's packing up after a sweaty night in some concert hall far from London will she really know whether she's Queen of the Wilde Frontier. 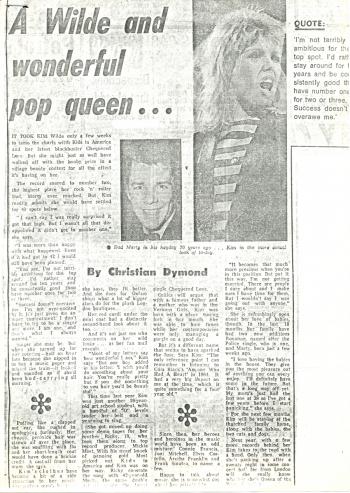