After the fifteenth interview, the same questions, just different faces and another lunch of reception hors-d'oeuvres, there ain't much glamor to rock and roll. This week's product, an attractive blonde, Kim Wilde, is being marketed as Britain's answer to Deborah harry. She smiles and pouts through the interviews. The cameras go and on cue it's 'no she doesn't think having a pop star father is an advantage' and 'yes she has her own image and buys her clothes at Oxfam'. Kim Wilde is yet another hit maker to go through the machine.

Her father, Marty Wilde, they're all Smith's really, hit the charts and then it was 'Oh you remember Marty Wilde the one who um...' Kim's is the Cinderalla story of every fan mag. Her brother, Ricky, was recording some demo tapes with sister lending a hand on vocal back-ups. Top forty producer, Mickie Most, it's all in the name, walked in to the studio and wham bam, a discovery. To complete the story 'We're the Kids From America' that brother Ricky had just penned. No-one saw the contradiction.

Kim Wilde is pushed as the new Blondie, scruffy blonde hair, flawless skin and skin-tight jeans, a girl from Chiswick who'll show America how it's done. We're not really the kids from America but if it sells, it sells. As she says: 'I've only been Kim Wilde since January'. We go through the motions of an interview, 'and how was Countdown'.

'Very nerve racking, I've never had to talk on TV before'. 'What about the song?' 'That was OK, I love singing. On Top Of The Pops we just mime.'

After one hit in the UK and smaller markets like Australia she has been sent forth to sell records and press conferences. Her manager is still talking about America, maybe next year. Despite the title, 'Kids in America' didn't raise a whisper on the US charts. Kim still hasn't got a band and hasn't done any live work. It's all studio, product, TV, product, promotions, product.

The sad part of Kim Wilde is that she isn't the pouting product that's promoted. When she talks about her pop idol father it's 'Dad', beneath the carefully painted eyes there's a 'take me home, I've had enough' look. Her music isn't brilliantly innovative, but she's got a good gutsy voice and a natural sense of theatre. Instead of working at it and getting a band together she's on the promotional merry-go-round.

Hype begets hype. Discarded albums and biographies are all that's left of yesterday's heroes. Last year it was Racey then Pussyfoot, Gary Glitter and a hundred other forgottens. Any talent is squeezed out in the hype sessions and interviews. In a year's time will Kim Wilde's manager still be talking about America and a band while a forgetful public are bombarded with the latest product? 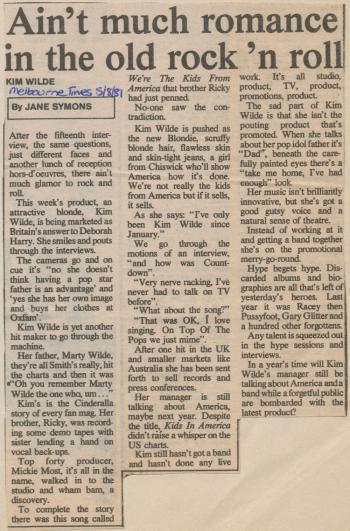