You write - together with your father Marty - the songs for your sister Kim and are also her producer. What do you think of your sister, speaking as her brother?
Ricky: I think she's great. She is very natural and seems to have been made for her job as a singer. I believe that Kim has a very great future ahead.

Did you discover your sister as singer?
I brought record producer Mickey Most some of her songs which I wrote. He liked the song "Kids in America" immediately. He was so enthusiastic that he wanted to make a record with Kim right away.

How is Kim as a sister? What are her good and bad points?
I think it's a negative point that she never makes tea for the family. She never helps out in the household anyway, except when she plays with our little sister. Aside from that Kim is okay in every other aspect. She can do things. She is very fast, works very hard in the studio and she never takes anything badly.

Did you get along so well as a child too?
When I was nine or ten we couldn't get along at all. We only quarrelled constantly. Then later - with sixteen, seventeen - we got together.

Are you jealous as a brother, that Kim has so many admirers?
No, not at all.

Do you have a girlfriend?
Yes, but she is totally different from Kim. She's got nothing to do with showbusiness.

Is she also blonde?
No, she has red hair.

How is it at home, does your mother protest when you bring girls in the house?
No. But I prefer to go out when I want to meet her.

Do you - yourself and your sister - have the same friends?
Yes. We like the same kind of people. The most do studies or working in "regular" jobs. Kim knows a lot of them from art college. At night we are often in our local pub, a wine bar, together and we discuss things.

What hobbys do you have?
Music, composing and writing lyrics takes up most of my free time. One of my favourite pastimes is driving cars. I have a VW Beetle. But I want to buy a bigger car soon, probably a Mercedes.

What car prefers Kim?
She loves American cars. She would love a giant Cadillac. I think with such luxury cars you are lucky if it rides without problems. And then there's the intake of petrol...

You come from a very musical family. Do you also make music at home?
No. I just play my newly written songs on the piano. My mother also plays a little. But she is more the business woman at our house.

Does Kim play the piano as well?
Yes. She plays very well, almost like a professional.

Did your parents want you to learn how to play the piano?
Yes. When I was ten years old, I had to learn even though I didn't want to. I hated those hours. Kim had to learn with me. The teacher always came to our house. I especially found the classical pieces we had to study so boring, that I wanted to throw away the sheet music. I wanted to learn more modern piecs instead. I also preferred the guitar. I learned that myself.

Were you also - like Kim - in boarding school?
Yes, for four years.

Name: Kim Smith
Date of birth: 18.11.1960
Place of birth: Hertfordshire / England
Height: 1.70m
Colour of eyes: bluegray
Father: Marty Wilde - was one of the biggest english rockstars in the fifties.
Mother: Joyce - singer
Siblings: Ricky (born 1959), Roxanne (born 1980), Marty (born 1981).
Career: Kim got to know the record business early on, because music bosses and managers went in and out of her parents house. With father Marty, mother Joyce and brother Ricky she was already on stage every now and then since she was 12. But father doesn't pile up the performances - which irritates Kim, because she wants to work in showbusiness. Her brother Ricky records his first record when he is 12 and after school plays in his father's band. Kim goes to highschool until she is 18 and then goes to art college in St. Albans. After her exam in autumn 1980 she tries again, without her father knowing, to take the first steps in showbusiness. Her brother Ricky composed a few songs for her With the help of the son of record boss Micky Most she records her first title. Kim immediately gets signed for a record deal. Her life changed dramatically. With her first single "Kids in America" she climbs the interational charts. Successful records like "Chequered love" and her LP "Kim Wilde" follow. 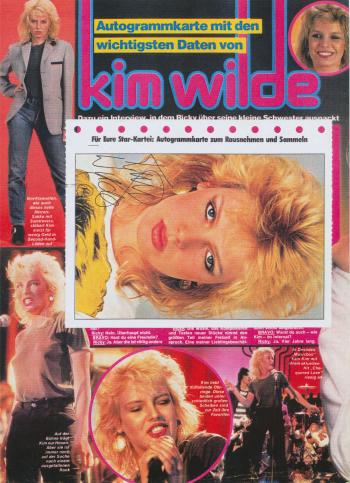 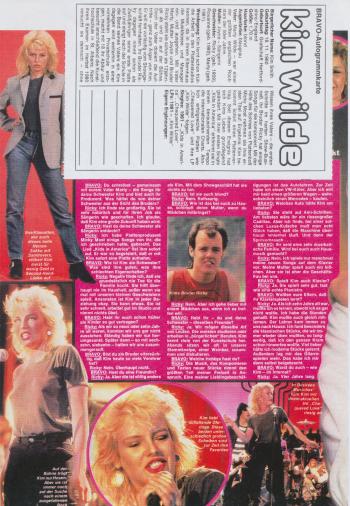 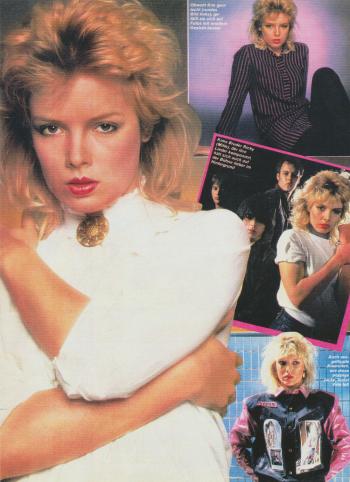 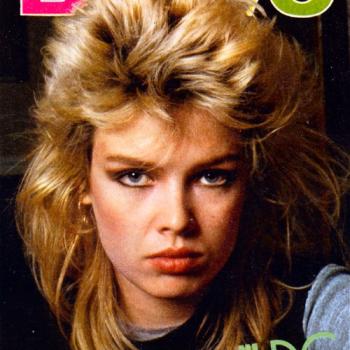