Fallen idol Marty Wilde is playing the local pub and club circuit in Scotland while his 20-year-old daughter is riding high in the charts. Wilde was once the swinger of the sixties - but now its the turn of his daughter Kim.

For she is No. 2 in the UK charts with her hit single Kids in America, with lyrics written by her dad and music by brother Ricki.

As he relaxed before going on stage at Hastie's Farm nightspot in Blantyre, 42-year-old Marty, once he darling of the pop fans, said: "It has been really amazing to watch Kim's career take off the way it has. It is like seeing the whole thing start all over again."

While Kim was still in her cradle, Marty has his fans rocking and fainting with hits like Teenager in Love, Rubber Ball, and Sea of Love. And although he still turns on the style at club dates, the proud father obviously gets his greatest satisfacting from watching his girl top the charts.

Said Marty: "Kim is a natural and she will go far. She is twenty times the entertainer I was. It has been all the more satisfying that Ricki and I supplied the words and music. Producing Kim is Micky Most - described by Marty as the "greatest producer we have". 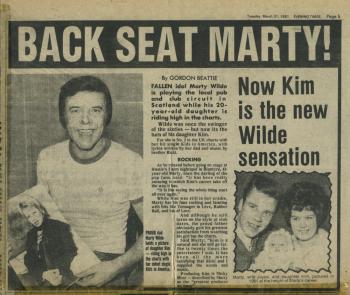