The most amazing thing about Kim Wilde is that she looks exactly like her publicity photos. The 20-year-old blonde singer from Britain, in Sydney to promote her debut album, Kim Wilde (released through EMI), is beautiful and rather shy.

Dressed in skin-tight black pants and with her hair done in semi-punk style, Miss Wilde might have stepped right out of the 1950s. She admitted she is "basically scruffy". It is a "rough and ready look that's pretty untogether, but definitely not uncontrived".

Even her songs are reminiscent of that era. But why not? After all, her father is Marty Wilde, who in the late 1950s was a popular singer. Marty, and Kim's brother Ricky, 19, write a lot of her songs. It was her demo recording of Ricky's song, Kids in America, which set Kim's career on its sudden upswing and changed her life.

Pop music for Kim Wilde must be a quick thing. "Write a good song, sing it, and get on with the next one before there is time to think about it too much." She regards being the offspring of a famous father to be more of a disadvantage than an advantage.

Does she consider the songs her father sang to be corny by today's standards?
"I suppose so, but then I love corny songs", she said. "My father loves country and western songs and so do I. In fact I like all kinds of music, whether it be classical, rock 'n' roll, blues or whatever." 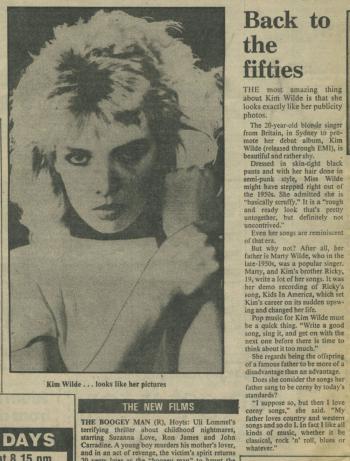