Beauty on the Wilde side

If you've got it, flaunt it! Singer Kim Wilde knows that a talent for projection is just as important as making the right music. If you'd like ot be a candidate for the wild treatment, turn the page to find out how you can enrol for a beauty make-over.

She's a very eighties kind of girl - cool, candid, with a raw sexuality. Although she's been likened to Debbie Harry and Brigitte Bardot - note the ripe sensuous lips - singer Kim Wilde rates individuality top of her list. 'I think the heavy make-up look is out. I prefer a person's character to show.' Not far off twenty-one Kim has the sort of talent and looks that made her first record, Kids in America, and follow-up single, Chequered Love, soar to the top of the charts a few months ago - not only that, but her first album, called Kim Wilde, also came out during July. Father Marty Wilde, a former rock 'n' roll idol who with Kim's brother wrote Kids in America, is in no doubt that Kim will tpo his success 'forty, fifty times over'. You only have to look at her beautiful grey-blue eyes to see the determination.

But don't get the impression that Kim Wilde is cold and calculating. She knows what she wants and deals with life in a quiet, professional way but seems surprisingly vulnerable. While top makeup artist Yvonne Gold made her up for our photograph, Kim took a keen interest in the beauty techniques. 'I spend five minutes making up for a show but only because I don't know how to spend an hour on doing my face.' Kim admits she still uses the same eye colours she bought a few years ago, 'Mainly blacks and browns. And I wear lots of kohl, especially as an eyeliner. But I don't like mascara because I hate having to take it off!' Her skin is flawless and she says she has her mum to thank for that. 'I've been into skin care  since I was fourteen because of what she taught me.' She moisturises with Oil of Ulay and tones with Lemon delph. Surprisingly enough for a girl in the public eye, she's not neurotic about her looks: 'I cut my own hair and bleach it blonde myself.'

Though she worries a bit about her figure - 'I'm 5ft 4-3/4 in and weigh nine stone' - Kim happily munched her way through a bag of crisps and large roll for lunch. 'I love chocolates, too. But, while I can put on three pounds really quickly, I can take it off just as fast.' She confessed to a passion for black clothes. 'I suppose it's because they make me look thinner. I wear trousers most of the time - I feel more comfortable in them - and never wear anything too flash. I don't think my legs look very good in skirts. After all, clothes do tell a lot about your personality.'

Once a keen hunter of clothes from Oxfam, Kim said she hadn't really bought any new things for ages - though the shirt she

[Note: remainder of article is missing.] 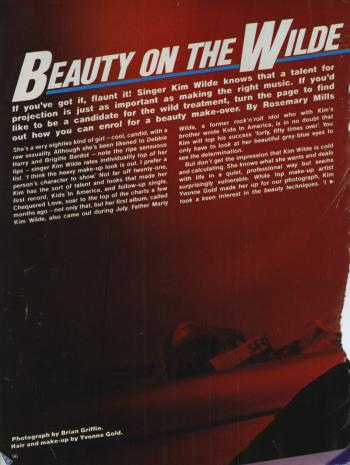 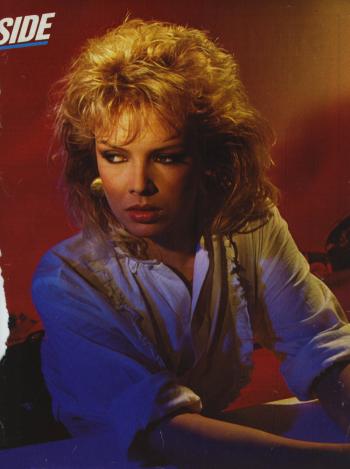