The girl we see here in the photograph is not only "so pretty" but is now the most important singer in England and has come to the top of the pop charts  in Iceland. Kim Wilde is just 21 years old, but her father, Marty Wilde, was one of the first "rock and roll" stars in the year.

"She's so sweet that I'm gonna eat her ..." said Cable Pop, when he had a look at beautiful Kim and likened her to Bardot in her early years in movies. The first record by Kim Wilde was released in January and went for the top and the same story is about to happen with her new single "Water On Glass" and also the first album, simply named Kim Wilde.

When she is likened to Birgitte Bardot, the singer said, "I can not see it myself, except we are both with blond hair, but my color is actually brown, I do not know about Bardot's hair. Otherwise I'm up for it. I like being compared to her, hoping I'll be as good looking at the age she is now. "

Marty Wilde, father of Kim, opposed the fact that she got into the record of all her compulsions, competition, financial difficulties - bad luck - and nervous tension. He actually says that his mind is out of the question of money and knows what she wants, whether in music or finance. "She's a good singer and a shrewd businesswoman," she said. 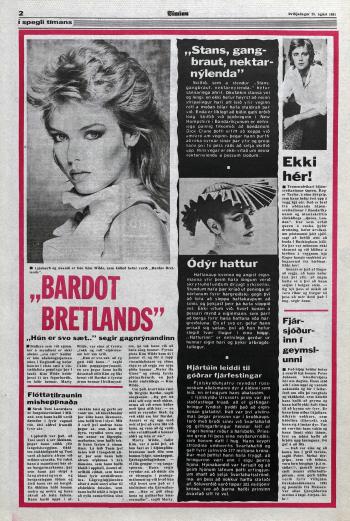