This is the hole truth about smash-hit pop-star Kim Wilde! She needs to get her boots re-soled.

Daughter of British star of the 50s Marty Wilde, Miss Wilde arrived in Melbourne on a promotional tour yesterday. Luckily, she didn't have to walk in the drizzling rain which greeted her - the path from aircraft to car was protected. Surely she must feel at home in this climate?

'No', replied the 20-year-old singer of 'Kids in America'. 'Even Australia's winter is better than Britain's summer.' The answer came swiftly and coolly. I think her dad gave her lessons about dealing with the press.

Miss Wilde had stayed up the night before in her Sydney hotel to watch THAT wedding of a girl her own age. Did she think Lady Diana was just a bit too young to handle it? 'No', said Miss Wilde. 'She's found someone she wants to spend the rest of her life with, that's all.'

How would she feel about venturing into the noble institution. 'Marriage is a very different proposition', she replied. Is there any chance? Is there a special one? 'I don't have any special boyfriend. And that's all you'll get out of me about my private life', replied the untamable Miss Wilde.

It's not surprising that she's pretty worldly about the music industry and life, generally: Dad Marty used to take her to recording sessions when she was knee-high to a stylus. 'I used to sing along with him', she said. Then there's 19-year-old brother Ricky, who, together with Wilde Sen., writes her songs. Miss Wilde lends a hand, too.

'I don't actually write, but I suggest idea to them', she said. 'I really haven't got time to write. I don't think I have the coherency at the moment.'

That carefully unkempt hairstyle - isn't it very much like Debbie Harry's, of Blondie? 'I've had this style for three or four years', she said. 'My natural hair is sort of brown... mousey... and I didn't like it. I didn't know whether to make it very black or very blonde, but I decided on blonde because bleach is cheaper than dyeing it.' A girl with such an eye for economics should consider visiting a shoemaker - that's cheaper than buying new boots. 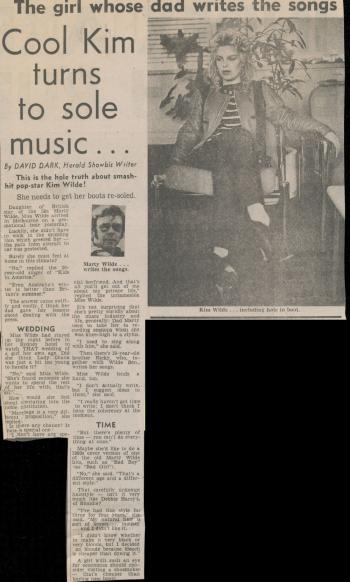