Girl next door to international star

Marty Wilde never thought his eldest daughter Kim was that beautiful as he saw her every morning for 20 years across the breakfast table.

And Kim thought her younger brother Ricky was so talented as they grew up together at the Wilde's home in Hertfordshire in London's home counties.

In any other decade but the 80s Kim would have been content to grow old in the shadow of her father, one of Britain's first pop stars. But when Kim celebrates her 21st birthday next Wednesday she will celebrate a renaissance that has turned her from a girl-next-door to an international star of modern pop in less than six months.

Kim's renaissance is illustrated by the changes in her looks. As our pictures show she looked sweet - but not special - as EMI Records prepared to launch her to the stars at the beginning of this year. She might have crashed back to earth immediately as 999 out of every 1000 shot into the rarified star air do.

But now her sultry face stares out of record shops across the world on cardboard stand-ups and album covers. When she visited Australia to launch her Chequered Love single she may or may not have still looked 'sweet' on the saturation TV coverage... but she certainly looked special.

In interviews she is the first person to admit that as recently as a year ago she was prepared to leave music-making to the others in her family. She denies that having a famous father like Marty is an advantage. 'In a way it's a drawback', she says. 'There's a taboo in the business about sons and daughters of famous fathers. I'm determined to change that. OK, I haven't got that driving force which makes a lot of pop stars successful... a deprived background. I've had a very comfortable life but I've still got a driving force which is just as potent.'

But Kim had decided to put her 'driving force' into painting and until last year attended a London art school. She had wanted to up-date the famous French impressionist artists. She says they were good but too 'prissy'.

The trouble was, she was a girl. 'You're painfully aware of the lack of women painters', she says. 'Colleges have mainly male tutors who give the blokes the majority of their time.'

Britain's art schools have always bred musicians, from Roxy Music to the Sex Pistols and back to the Who. But Kim didn't see herself as a singing star and just let Ricky push on with his promising songwriting, playing and producing. But when he wanted to submit some demo tapes to Micky Most's Rak Records he needed a voice. He asked Kim and she did it as a fraternal favour. Together they made some demo tapes and submitted them to Mr Most - the man who had stood behind the successes of another era including Brenda Lee, Nancy Sinatra, Julie Felix, Lulu, Mary Hopkin and Suzy Quatro.

One day by complete chance he came into the studio where Kim and Ricky were working. 'I immediately heard a hit', he says. With Most's encouragement the pair began working on one of Ricky's outcast songs, Kids In America, which he hadn't even planned to record.

The rest of Kim's rise and rise is a history well documented by high-rotation playlisting on radios in Europe and Australia. But she has never visited America. Her first song still hasn't been a hit in the country it is about. The lyrics say 'there's a new age coming, I warn you' and that's something America doesn't want to know.

But it was a smash in Britain where even te cruellest critics fell in love with Kim's style. It peaked at No 2, as high as any of her father's hits. It fitted in oddly with the other movements of its era; it may not have been 'new romantic' but it was certainly up to date with modern music technology and the '80s trend away from performing bands to recording artists.

On the film clip, Kim perhaps unwittingly reproduced the poses of another Brit-hit, Marianne Faithfull, right down to the striped T-shirt and venetian-blind backdrop. But the film showed her production crew was up with the modern requirements for any good pop song - no matter how good the song is, it only sounds as good on TV as the film clip looks. And Kim looked fantastic.

She jetted to Australia on a promotional tour like all one-hit wonders. But her Countdown performance of Chequered Love showed that she wasn't finished yet. She sang the song with a 'band' of mannequins who stood immobile at their guitars and organs with red checks painted all over their unclad bodies.

The following week all of the city's record shops sold out of the single. There's a new age coming, I warn you. 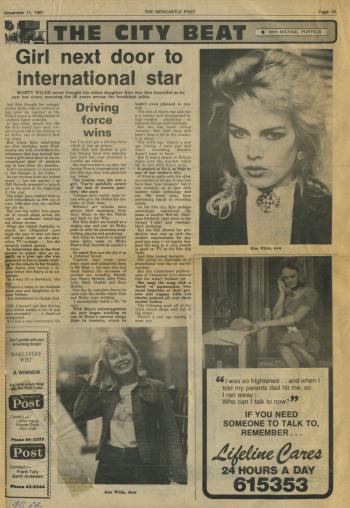