Millions of teenagers dream of Kim Wilde every day. Girls want to look like her, and go to the hairdresser's with a picture of her under their arm. Boys think she's the best. And recently a British newspaper called her a younger version of Debbie Harry. "And to say that I felt like an ugly duckling five years ago", laughs Kim. "I admired the other girls in class, because I thought they looked so beautiful. I tried everything to look a little better, but no results, I thought. I was very shy in those days, didn't dare to look a boy straight in the eyes. He'll probably think I'm ugly, I told myself."

In love with Clint Eastwood

Although she was surrounded with love at home, Kim felt very lonely during her teenage years.
"When I was thirteen, I had my first boyfriend. David was his name, and he was a year older than I was", remembers Kim. "It was not a joyful time for him, because I felt very unhappy during those days, and that miserable feeling had its effect on him. A few months later he broke up with me. And I fell in love with Clint Eastwood! I'd seen a movie with him, he was the prince of my dreams without a doubt. I believe this lovesickness was psychologically explainable. I was afraid of boys, and so I chose someone I didn't have to look straight in the eyes. Yes, Clint was my big childhood love, although he never knew it obviously."

Her unhappy feelings also affected her parents. In those days she avoided them. "I still don't know why, but a teenager is bound to react a little weirdly. I didn't have any issues with my parents. They took it well, they realised I had a difficult time. I stayed away for whole nights, just because. My father never punished me for that, although I did know he didn't approve. He felt it was good to sort it out by myself. And that proved to be the best way."

Sunshine in the house

"With the birth of my sister Roxanne (now 3 years old) everything changed", Kim continues. "The baby brought sunshine in the house. I help out my mum with caring for her, and that brought us back together. My mum became my best friend. She helped me grow up. She made me see that I wasn't so ugly, but that I just needed to change little aspects of my looks. I went to the hairdresser's and came back with a modern hairdo. I used some make-up around the eyes, and it worked miracles. I think I owe my eyes the element of attraction. They reflect my personality. I started to dress better as well, more modern. I noticed by the reactions of boys that the changes were seen."

Kim is not able to count her admirers on two hands anymore. She is flooded with marriage proposals every day. And still she is alone, just like before.

"I know that boys like me, and that is enough for me", she laughs. "In the past year I haven't had a boyfriend. Just because I don't have the time. My career is more important at the moment. If people ask about my love life, I answer: 'tell me about your love life, it's probably more interesting than mine'. I feel very happy on my own."

Although her father and mother are very happy together for years, Kim is afraid of marriage. "I don't think I could love one and the same man for all of my life", she confesses. "It's a difficult thing to do, and only few are able to make something good out of it. I don't know yet if I could. I don't think I'll ever get married." 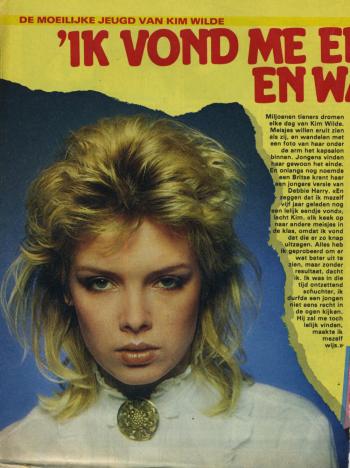 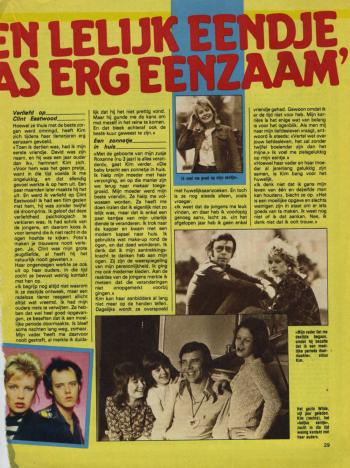