"I'm happy that they like my records in Denmark. It is hard to believe. When I recorded it first, we thought only of England. Rest of the world said absolutely nothing in our thoughts."

So says the British rock singer Kim Wilde from London on the phone to BT. The reason is partly that she's on "Music Box" on TV tonight with "Chequered Love", and that her LP at RAK today goes up to third place in the TOP 30, while her hits "Kids in America" and "Chequered Love" have been in the TOP 15, 15 and nine weeks respectively.

Kim Wilde, born 18 November 1960, has gotten show business into her along with the breast milk. Her father is the former rock singer Marty Wilde, who also in Denmark had big hits with "Donna" and "A Teenager In Love".

Marty Wilde has always been singing professionally, and in recent years he has had his son Ricky, age 19, with him in his band, like Kim who has also been included as backing vocalist. Kim and Ricky still live with Marty and Joyce Wilde in Hertfordshire, and they have no plans to alter this at present.
"I highly appreciate my parents. In particular, I admire my father because he has been able to follow over time, both musically and on all other fronts. The fact that people like his lyrics on my records is the best proof that he still is as young as ever, even at 41 "says Kim Wilde.

Also her mother, Joyce was in showbiz. She was a member of the singing group The Vernon Sisters, and Marty was only 20, Joyce 18 years when they got married. It was around the time Marty Wilde including visited Denmark and was in Otto Leisner "Plate Parade" on TV.
"I love being at home with mom and dad. It is very important for me to be home to look after the little ones. I am not the type who prefers to be as much away from home as possible. Therefore I have only a few real friends. I don't have the time or the inclination. I have some friends over, but those are Ricky's usually. Unfortunately, he is also just as quickly tired of them and I'm stuck with extra on them", says Kim Wilde.

"The little sibling" is Roxanne, a girl of two years, named after a hit song by the band The Police, and son Marty Jr. at just five months.
"My mother has always wanted four children, but it's certainly difficult to realise, after Rick and I grew up. I love them both, and I'd rather stay at home and look after my bedtime than to go out in the evening. It isn't always nice. People know me and often speaks in an unpleasant way to me on the street. I can do without it," says Kim Wilde.
The 20-year-old singer has never performed as a soloist on stage. It is her great ambition to stand in front of the audience and get their immediate reaction to the songs she sings. There is, however, no time for at present. Kim is regularly in the studio to record new tracks - her latest hit "Water on Glass" has just been number one in the UK - and she travels constantly around to make TV, be in the radio programs and sign records in record stores. It means the earliest a tour of Kim's calendar at the beginning of next year.

Especially in the British press Kim Wilde is referred to as a sex symbol, but she has only laughter to spare for this.
"I'm not sexy and never looked at myself that way. I am both small and slight, and my face is not particularly neatly. I have always had difficulty in getting hold of young guys. Today, the better, but then I do not know if they are interessered in me because they think I'm nicer than many others, "says Kim Wilde, who almost always wore T-shirts and jeans, because she has no interest in dresses.
At this point it is appropriate to quote the father Marty Wilde in an interview with him in the newspaper "The Sun", "I called directly Ricky to go into pop music, while it was different with Kim. I have seen many girls go home bust in the rock industry, so I've probably been a little over-cautious with Kim. But I underestimated her, she looks at it as pure business. I did not realize how good she looks, until I saw the video for her hit "Kids in America". I'm so used to seeing her on the other side of the breakfast table that I had never really given any thought to how beautiful she is."

Kim Wilde has always onset to be a singer, but it was understanding correctly to something last year when she went out of Hertfordshire College of Art and Design. Although she remembers the years as a teenager clearly: "Growing up as the daughter of a famous father is something that has its good sides, but it's also got it's downsides. One must learn to live with the fact that many despise you because down live in a bigger house than them. And many believe that one leads a decadent way of life, and it can seem hard. It has probably also been helping to forge unity together in our family. "

And so we talk about the family business Wilde. Kim Wilde sings. Her brother Ricky and father Marty writes songs that Ricky produce on the plates. And the mother Joyce serves as their manager in their joint company, which they call Big M productions. "We just hope that it can continue that way," says Kim Wilde. 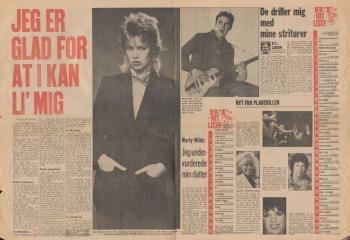