Kim Wilde is the newest lady to rock the stage, defying the devil. Kim Wilde is a girl who got to sign a recording contract with Mickie Most's Rak Records company. Mickie was already successful in producing a star, Suzi Quatro. Kim resembles Suzy in many respects, even the number of hits. And if Kim sees herself as a cruel and ruthless - Suzi is the same when they have to. Kim loves leather cowboy boots - but so loves Suzy. Kim thrives best in worn jeans. So does Suzy.
Kim is also much more than courage and ruthlessness. Behind the scenes Kim acts like Mohammed Ali in the TV commercial where he brags that he is never afraid of anybody.
Today, Kim is 20 years old. Her father, Marty Wilde was the same age when he appeared in a television entertainment program in 1959, Oh Boy! Other stars of the show were Cliff Richard, Billy Fury and Adam Faith. Marty Wilde's second entertainment program was 6.5 Special and his hit singles Endless Sleep, Donna, and A Teenager In Love won thunderous acclaim. Marty Wilde is an adviser to his daughter, Kim, because he knows himself heartbreakingly exactly how uncertain and fickle public popularity can be. Marty's own career has risen and fallen dramatically. Even today, he gigs regularly.
Marty Wilde's career fiasco was formed in London with the musical Bye Bye Birdie, in which Marty made a parody of Elvis. Marty's fans rushed to take a look at their idol, but left angry and disappointed. Marty had been acting at the expense of Elvis.
Kim's years younger brother Ricky produces his sister's songs. Ricky was a promising star at the age of 12, with the songs I Am An Astronaut and April Love. Besides singing, song lyrics were written by Ricky himself.
The Wildes still live in the rural area of Hertford, St. Albans and Welwyn Garden City, 40 km from London. Ricky continues to write songs with lyrics, together with Marty. Rickim Music is their own company. The latest success from Kim's album is the number Water On Glass. Translated into Finnish the lyrics go like this:

(…)
(adapted from the translation Pia Bursell)

Kim's third advisor is her mother, Joyce Smith (Marty's real name is Reginald Smith). Joyce was dancing at the famous Vernon Girls group, when Marty saw an excellent performer. Joyce Smith did not let Marty's career take off and landing interfere with your doings , but continued to the formation of an unusual trio, who organized entertainment programs and hunted for new talent in the record industry.
Kim has been exceptionally harsh coaches already in your family, but she also knows how to think for themselves. Kim already knows that she does not want to be a one-hit wonder. Today Kim's CV already contains three landslide hits - Kids in America (Ricky & Marty), Chequered Love, and now Water On Glass / Boys.

Are you now off the ground, when all three of your discs has become a success?
Not exactly. Yes, I am unlimited happy. Need to take into account that now I get paid for it, what I do best, singing. I sing during free time all the time. I sing at home. I sing when I am traveling.

Have you done the work that you hated?
Not exactly. I was selling in Harrods, the luxury London department store. I was in the clothing department, and I enjoy the fact that I got to introduce the new fashion for the customers and suggest to them which style would be best suited. My biggest victory were the circumstances in which a customer bought something completely different than what he had come to buy. I recommended for clothing, however, only when I was sure that it really suited her. Many customers came back later, just to thank me. Their friends were praised by choice and they said it was my talent. I enjoy any situation immensely.

What kind of clothes you like yourself?
I am afraid that I have a healthy dose of scruffyness. Sometimes Rick misses his own clothes. I like such shirts, where is the vertical stripes. I like the fresh and strong colors and dark tones that highlight blonde hair. And I'm crazy about belts, especially those where there are two buckles. And then I love the black corduroy. I also love to wear high heeled shoes and high heeled boots. They make me feel a little longer (Kim is 162 cm)

Where do you buy your clothes?
Do not laugh now, but I buy most of my clothes still second-hand or second-hand, thrift store and charity bazaars. We have shops in England, whose income will go to a charity, such as the "War on Want", "Help the Aged", "Save the Children" Oxfam, where people can drop off their old clothes. As such, I love to wander around the shops. Often, I'm looking for black slacks and worn a pair of jeans that are too small for me - it is a challenge to infiltrate the jeans that are too small, degrading the pair of jeans - or the self. I also like the white sweater, etc., which has a high collar, polo shirts and vests differences. I also bought a used school girl's overcoat with belt weighing a mere quarter of a kilogram. I like it a fantastic jacket. Ricky and I have a habit of often poke around in the attic of our home, where dad stores his old stage clothes. Ricky found the leather pants, which the father took the 50's and I found an old jacket. My friends were of the opinion that I have something very special T-shirt and tux.

You seem very economical?
Yeah. Until recently, I have had very little money. I cut my hair myself. Ricky feels that my hair is like a punk's. However, I am completely satisfied with my own style. Expensive hairdresser would change the whole appearance of the comb by me in my sole discretion.

Are your father and your brother helped you a lot in your career?
Quite a bit. Ricky produces my records, which means that he is responsible for the final shape of the Rak Records release. Ricky works as a supervisor, for example, requests to sing a line or two again and I'll do it. Ricky commands and I will obey. Ricky is also a three-person keyboard pianist, so that he or she is a wild rush, though he would tape-rate segment before I sing. I listen to the band's music recordings and Ricky is free to focus on my song to follow. Father listens to the overall impression. I never cease to marvel at how quickly the father hears the wrong note or a pollutant in the sound. Father and Ricky also said the and compose music. They have encouraged me to compose myself, but I have not yet done so. Due to the fact that I have so much going on now.

Have you done anything for the show directly to the public?
I do not as yet, but I will soon. I want two months of proper training time, before I take to the stage in front of the audience. I already did one TV program in France. It was huge fun, even though I was on the program, only one song. I want to do a show where I perform at least an hour.

Kim Wilde - Story in the second part of Andy Gray reveals why Kim Wilde Show in a dream almost did not happen, and how Kim's success threatened the entire family fortune. Kim Wilde Story next part of the following Suosikki. 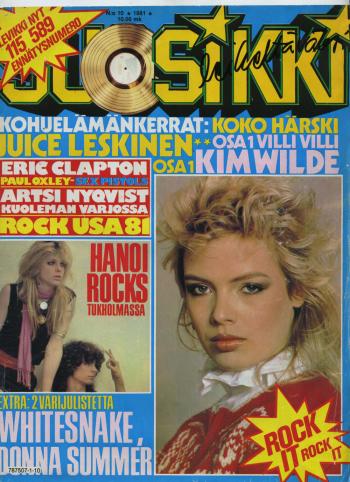 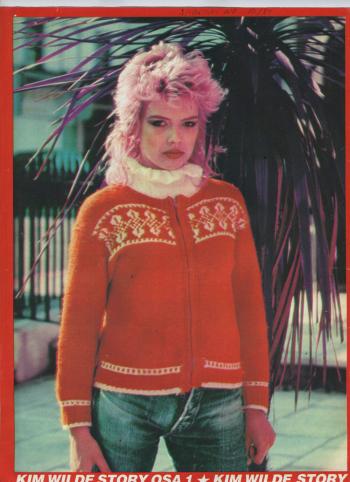 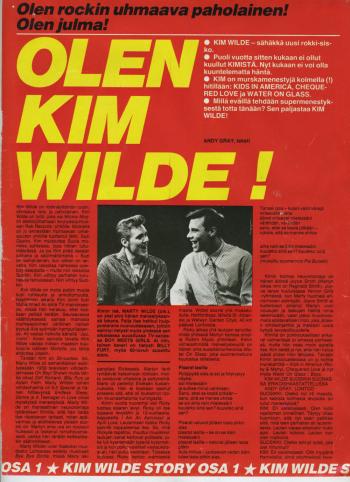 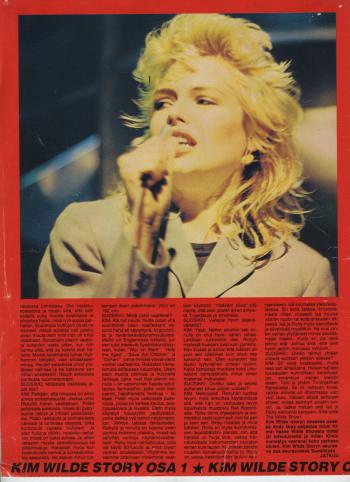