The debut single 'Kids in America' took the British charts, then took over the rest of Europe and up the lists on the continent - and now it's the new single 'Chequered love' that leaps among the hubbub of summer hits.
That's how the career started for the only 20-year-old English Kim Wilde. In the first half of 1980, her name was smoked out on Top on the Pop-world of star-filled sky.
Kim Wilde didn't get her ability to sing with success from strangers. Her father, Marty Wilde was even in pop music's childhood an acclaimed idol, who had great success and got a taste of the money that lurks on one corner in the cutthroat industry.
Certainly, there has been one and another with the terms of success and star status - but Kim Wilde has been in good hands. The producer behind her record success is veteran Mickie Most, who through the years have had the same gig for well-known names as Nancy Sinatra, Mary Hopkin and especially Suzi Quatro. Also Kim Wilde's brother, Ricky, is part of her cometary career. He sent a demo tape to Producer Most, who immediately took an interest in Kim and her special voice. It was the 'Kids in America' - which was also written by brother Ricky. 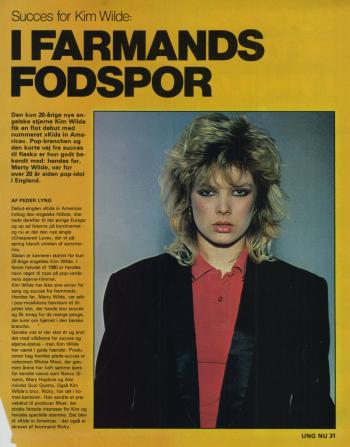