Sex isn't just in her voice, but also in her appearance: the young Kim Wilde. With two hits, "Chequered Love" and "Kids in America", and a successful LP that bears her name, the 21-year-old Englishwoman is one of the new top stars of the early Eighties. And the best proof of the old adage of the apple that doesn't fall far from the tree. Father Marty Wilde along with Cliff Richard and Tommy Steele was among the first garde of English rock 'n' rollers. Initially he was skeptical about the musical ambitions of his daughter, but now he is working with Kim's younger brother Ricky, who produces her records and keyboard plays an important part of her carreer - her songs, which the sexy blonde with the pout and plush eyes imprints on a cheerful generation. 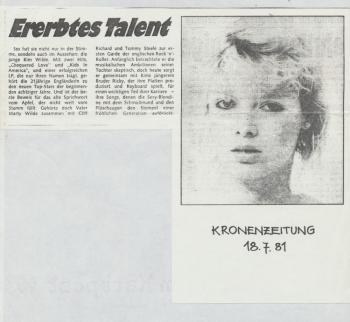