Pop music history is going to repeat itself via Kim Wilde, or more correctly thanks to the shrewdness of Mickie Most.

To understand the replay means going back to the early days of the Beatles when John Paul george and Ringo were presented as the fun loving, mad cap mop tops of 1963 and 1964. A few years later the group had outgrown the cute bit and started to move into music that was more serious. Fine for the fans who had grown up with them from the beginning. But boring for the new breed of teenagers who wanted fun in their music. So, a man named Donny Kirshner created the Monkees, four mad cap lads whose weekly t.v. antics were straight out of the Beatles first film 'A Hard Days Night'. Older fans stuck with the Beatles. Newcomers prefered the Monkees.

And so the clock leaps forward to the late 70's. This time the darlings of the scene are Blondie. They started out with cult status, but the 'Parallel Lines' album made them household names. And bleachie blonde Debbie Harry was everyone's darling. But not anymore. The fun days are over and Blondie have grown into something else. Debbie Harry's hair is dark again and her solo album is produced by Chic. There's a whole new audience who wishes they'd been around for the 'Parallel Lines' era. And that brings us to Kim Wilde. With three hit singles to her name and a head full of loosely tossed blonde tresses, it looks like she's going to be the Debbie Harry of a new generation. Kim Wilde, nee Smith, is the daughter of a show business family. Her mother was one of the Vernon girls, who appeared on the 50's equivalent of Top of the Pops. Her father was Marty Wilde, who was like a Barry Manilov for teenagers during the same period. Kim used to sing back ups for her dad along with her mum. In addition to 19 year old brother Ricky she has a baby brother Marty who was born in April. Kim herself was born on November 18, 1960 and she still lives with the family in Hertfordshire. 'My father encouraged me to go into show business' recalls Kim. 'He made some records when we were 16 or so. But I went to art college. The way I got my break was totally unexpected. Ricky had written a couple of songs and I sang backing vocals on a demo disc we made. He gave the record to Rak, who asked us to re-record the songs.'

As the now legendary tale goes, Micky Most came into the studio because he was in the building and liked what he heard. He was the one to convince the Wildes to record the song they didn't intend to record that day, 'Kids in America'. Most's intuition matched with the Wilde's music magic made it all happen.

If Kim is taking success calmly, it's because she had little to be afraid of. She doesn't have to worry about being ripped off by management, record company and bands because she's surrounded by people she knows she can trust. She's reluctant to see herself as a pacesetter. The Kim Wilde 'look' means that she cuts her own hair and sticks Clairol hair lightener on it. 'Some bits it sticks to, others it doesn't' says Kim of her elaborate beauty care.

Her clothing is strictly low budget, much of it coming from her local Oxfam shop in St. Albans. For the moment Kim prefers to dress scruffy and scatty, ut now that she's a famous face, sneaking into her local Oxfam shop may not be so simple. 'I've always appreciated having a good home and being provided for and getting most things I wanted. Some people get a complex about having too much, some get a complex about having too little. Not me. I remember something I read once. It said if you get everything you want in this life you might not want everything you get. So Kim Wilde is her own woman. Yes, other people write the songs and produce the records, but Kim is far too outspoken to be a puppet like Sheena Easton. Kim has style and flair and that's not something any record company make over department can give you. She doesn't even think having a famous father counts for very much.

'There's an idea that if you're related to someone famous that you should be spoiled mindless and untalented.' Kim doesn't like the cliche and she intends to be different. Meanwhile, as Kim spends the summer down under in Australia her musical father and brother are hard at work writing new songs. Together they talked about Kim's hit singles and a little about how they came together.

'Kids in America' says Ricky 'was written at home. I did the melody fairly quickly, in about half an hour. Dad and I fancied it as the title track of an album with Kim in ront of a New York skyscraper. We wrote it just for fun and it was great that it got as high as it did. 'Chequered Love' was the opposite. We knew we had to write a hit follow up. Nobody wants to be just a one hit wonder. We kept coming up with different melodies, but we weren't happy with anything. There were a lot of trips back and forth to Mickie with songs, none of which created the right impact. Time was running out, but we got this one done just in time for the deadline and cut it in two days. 'Water on Glass' is basically about a rare minority of people who continually hear sounds in their head. It is a real disease for which there is no cure; a factual thing rather [than] a fictituous one. It would appear to be a psychedelic song in many ways, but it's not because there's a lot of truth in it.'

And even if you don't hear all that in the average Kim Wilde song, what's importnat is the overall impact; the whispered vocal, the quick paced production that's not too rough or too smooth, the blonde hair that's not too straggly and not too straight. Kim Wilde takes her place on the pop pedestal of '81 without having to be as contrived as Toyah or Hazel or a jaded as Debbie Harry. Hopefully, her best is yet to come. 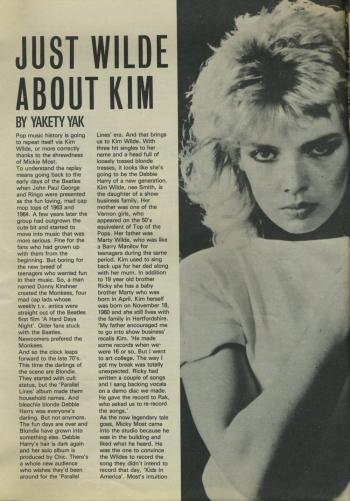 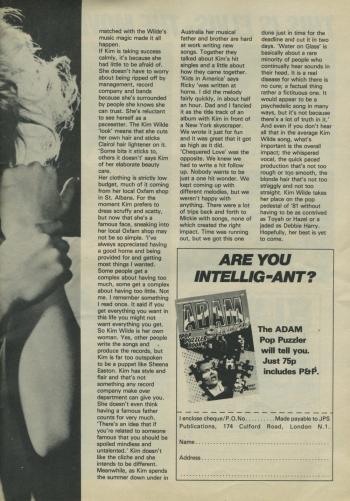