But she has the looks and the talent to make it on her own. Her father is Marty Wilde, 42, who was a British rock idol of the late '50s and the early '60s. However, Kim believes having a famous father is a drawback. She said: 'It is harder for me to make it because there is a taboo in the business about sons and daughters of famous fathers. They hardly ever seem to succeed. But I'm determined to change that.'

So far, her music has been a family effort, with her brother Ricky, 19, playing most of the instruments on 'Kids in America' and on her self-titled album released here yesterday. Ricky also wrote much of the album's music as well as producing it, while her father wrote her lyrics and co-manages her with Mickie Most. Her mother manages her finances and runs her fan club.

Kim has grown up with music and musicians, and if she felt like it, could do impressive job of name-dropping. But the names she would rather mention are the modern British bands she admires, including UK Squeeze, Tenpole Tudor, Simple Minds, Psychedelic Furs, Talking Heads, the Clash, and Elvis Costello. She said the British music scene was the best in the world at present.

'England is the only place to be if you are into the music scene', Kim said. There was plenty of room for the political and social comment content of current British music. 'Barriers are breaking down - all the so-called alternative music is in the Top 10.' So far, musical career has been limited to the studio, but Kim intends to put a band together and begin touring next year. She was in Australia last week to promote her catchy follow-up single, 'Chequered Love', and her debut album. 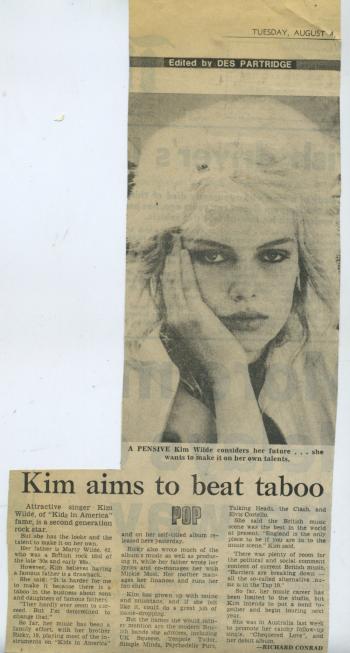