Kim has music in her blood

"I love music and people. I am sometimes outgoing and not altogether shy." Tha tis how Kim Wilde sums up her own personality, a personality she will have to depend on to reach success in the world of rock. Kim Wilde, daughter of Marty Wilde (a singer and songwriter of old), is well known for her current hit single "Kids in America" and is as much a rock singer as she is a family girl. Coming from a family heavily involved in entertainment, it is understandable. But Kim denies that having a famous father is an advantage. "In a way, it is a drawback. It is harder for me to make it because there is a taboo in the business about sons and daughters of famous fathers. They hardly ever seem to succeed. OK, I haven'tgot that driving force which makes a lot of pop stars successful... a deprived background. I have had a very comfortable life, but I have still got a potent driving force. Dad always encouraged us and gave us a broad appreciation of all sorts of music, including the classics. Ever since then, I have always dreamed of becoming a singer."

Kim Wilde, who has just completed a fleeting tour of the Eastern States, says she was disappointed at not visiting Perth. Although she is not performing while she is touring, she is promoting her new songs, including Chequered Love and Water on Glass. Kim's off-beat fashions have always been a part of her, and she hasn't seen the need to change. "The clothes are cheap, so you can buy more of them and swap them around in different combinations. The clothes the individual wears is a statement of their personality."

On romance, she says: "I've no steady boyfriend. I don't mind that, it doesn't seem to bother me. I guess I am choosey. But I love boys, and sex is as important to me as it is to anybody else. I like the thrill of the chase. I am a Scorpio, and the yare incredibly passionate people."

Kim is determined to have her own fashion and doesn't mind if she sets a fashion. "I want my own image, but I am basically scruffy." For a girl who is 20, Kim could be regarded as very street-wise as she has been told of the pitfalls in the music game."I've always appreciated having a good home, being provided for and getting most of the things I wanted. So people get a complex about having too little. Not me. I always remember something I read once - if you get everything you want, you might not want everything you get. Chequered Love was inspired by my mum and dad, who would be two of the most opposite people you could ever meet. They are like opposite magnets, so my dad wrote the song."

Kim is lucky having a ready made back-up that she can trust with her brother, Ricky, and father, Marty, writing all her songs. Kim's driving force she says is simply "the love of singing". For fans of the Kim Wilde style of singing, her new songs will be hailed as even better. She has a variety of songs on her new album, self-titled "Kim Wilde", and it really is worth a listen. Recording Kim is fine, but will she face up to the test of live performances? She says she is keen to start and that will have to be seen. Kim, a product of Hertfordshire college of Art and Design, has always had an artistic flare and would like to pursue it. 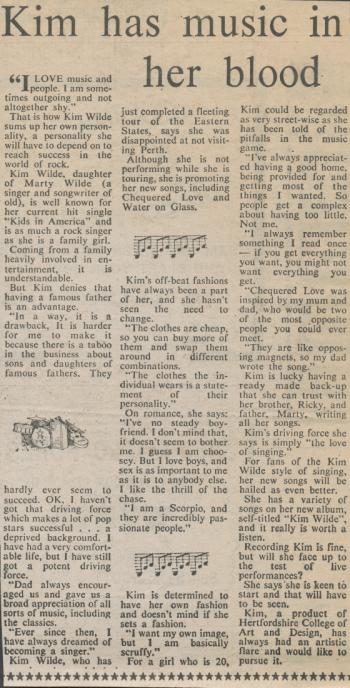