Since her father was already on the stage in the 1950s as Marty Wilde, no one thought about whether Kim Wilde was actually an artist's name or not. It is! Kim Wilde was born on November 18, 1960 in London's Chiswick district as Kim Smith. Kim, however, had an early opportunity to get used to the exciting sounding pseudonym. As the picture from 1973 shows, Kim was already 12 years old with brother Ricky to the support of papa Wilde. Eight years lie between the inconspicuous young girl's photo and today's Kim Wilde. "I did not like my face at all, and today I'm not quite satisfied with my appearance, my cheeks and too thick, so I don't laugh so often because I always look so upset. My hips are much too wide, the legs too short, my boobs too small. "

By the way: It is quite possible that the family Wilde will soon be heard on record together again - this time of course with Kim as a star. The singer would like to sing a rocking duet with her father - he has a sonore country voice. In the studio, Marty Wilde has always been a producer. Perhaps Marty Wilde will appear as the opening act when daughter Kim starts her first tour next spring? The mother-of-pearl guitar with the signature, which Kim's father holds in the photo, is still in family ownership. 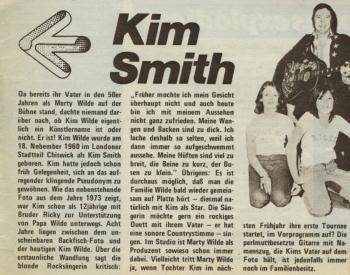