Kim: the Wilde one with the pout

Her pout reminds one of Hollywood's film legend Marilyn Monroe. Her mysterious cat eyes are comparable to France's sex symbol Brigitte Bardot. And with her wild blonde mane she resembles Debbie Harrie, the exciting singer of Blondie.
Even brother Ricky, who produced Kim's hit singles 'Kids in America' and 'Chequered love', says of his sister: "She is so sexy that even I am breathless sometimes."

But when Kim starts singing, the fans forget all the other sex symbols. She stays cool about it all herself. "I accept it as a compliment, when people compare me to Bardot, Monroe or Blondie", she says. "But someday it will be: she looks like Kim Wilde."
Kim, who lives with her parents and her siblings in a villa in Hertfordshire, north of London, has a lot to be selfconscious about. Even as a child she flew with her parents - father Marty was a famous pop star himself in the early sixties - around the world and supported him during tours. World cities like Tokyo, Los Angeles and Sydney are not unknown to Kim, who turns just 21 in November.

She went to a good private school, graduated from high school at 18 and then went to Art College in St. Albans (Hertfordshire), but the love of music made her leave it again after a year. "I was just waiting for the occasion to become a singer", she admits.

Even though she dresses inconspiciously - she loves wearing black and dark clothes, men's coats and tight blouses, which she buys in London's Second Hand Shops like Oxfam or Dr. Barnardos for small amounts of money - everyone in the streets turns to see her. Among her clothing are only six dresses. She loves wearing trousers instead of skirts, because she thinks her legs aren't beautiful enough. Kim doesn't like fashion anyway, because it doesn't stress individuality enough.
With brother Ricky (19), who recorded with her their first self-produced demo tapes and landed a record deal with record producer Mickie Most, she is more connected than just by sisterly love. He plays keyboards in her bands, is present during photo sessions, is free to express his opinion to her and helps with everything else. In the old days they used to fight like all siblings do, but now they need eachother as much as the other.

Also the first LP with the working title "Turn of Tide", which Kim wants to release soon, was produced by Ricky with Mickie Most. Although Kim has had enough experience with TV cameras and photo lenses by now, she is still nervous about playing live. This is why she is nervous about a first tour, which is planned for this year: she wants to rehearse with a band beforehand and try out if all works well.

After photo sessions and interviews Kim loves to spend time at home: she loves to make long walks through the woods and takes care of her younger sister, Roxanne (one and a half years old, named after the first single by the Police) and her little brother Marty (3).

Besides that Kim is in the Wilde household the unbeaten master of making Japanese meals. About his talented daughter father Marty says: "When Kim started, I was very skeptical. But now I know that she will eventually surpass me..." 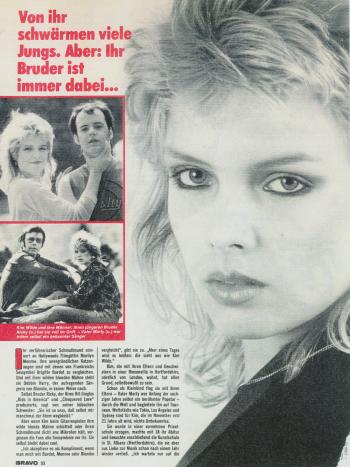 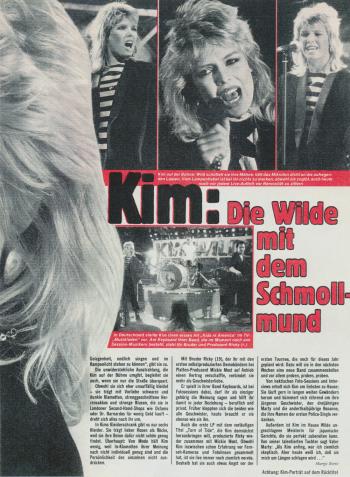