Good news for bachelors: rock's Brigitte Bardot, our Kim Wilde, has let it slip that she doesn't want to depend on her parents until the end of days - which is good, because they're getting shorter again. The blonde vamp with the sultry lips and the "you should know what I'm in the mood for" look in the eyes wants to get a little more independent. A flat in London, or something like that. She is almost 21 so that's allowed. Dad and mum Wilde aren't that happy with the fast development of their daughter, who hasn't been at home since her first hit. Kim has just returned to a visit to Japan and Australia, where she has become the dear of the photographs there. She is preparing for her first tour in England and Europe. And then: the kids in America. 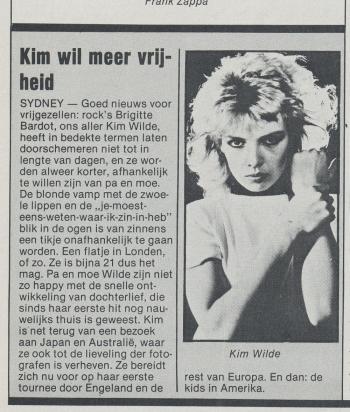