A star shooter there, with her debut LP, has shown that she will not fade prematurely.

1981 will most likely be a year that will be remembered as a year that brought the music new styles. An oceans of styles, yes, actually any hesitant style! From the happy "rock-a-billy" to "futurist-bands" like Spandau Ballet and Visage. And from the chaotic whirlwind of this musical melting pot, Kim Wilde also crashed into our heads.
"Pop music", in its present form, has, as so often before, declared dead (most of them wishing it to die!), but now Kim Wilde has brought this genre new life with her hard and cash texts, That, in one way or another, has avoided suffering from the crown of being a cliché. With her debut album, "Kids in America", she smoked tops like a small comet in most European countries. The Russian authorities had to do more trouble than otherwise, to stop importing this western women's decadent young lady, now flowing over their borders. (A rumor says that even Leonid Bresjnev frequently flips his personal copy of "Kids in America." Of course, this happens only in the dark and darkness of the night!) While the bolcheviews rocked "kids" (OK, that's enough foolishness! - ed.) her latest single appeared on the international charts. That Kim Wilde's newest single, called "Chequered Love", has both juice and power, there is no doubt, even though one may have sacrificed a little more on the mix and technique. This month, her first LP will be presented as well. The album will soon be called "Kim Wilde", and contains both her singles and there will no doubt be more from this album.

In spite of the fact that Kim's father is the 50-year-old rock star Marty Wilde, Kim's own initiative brought her to the music world, and meeting the "real" people quickly turned out to be a slight matter. Her father has maintained the friendship with the people who have an influence in the industry and her brother Ricky was a studio technician who has also shown talent for writing songs. Ricky has also shown talent for writing songs. Ricky is also a friend of the son of the famous record producer Micky Most (confused? !!) so through this connection she made a demo band to Micky Most, who immediately gave her a contract with the record company RAK.
By the end of '80, Kim was in the studio and Brormand was involved, both as a technician and on the keyboard (it is also him who plays key instruments when Kim gives a concert). Her father had always tried to warn Kim against the oblique joints, and at the present time he did not know anything about what was happening. It was not until the album was in the shop, she told her father about her new career. Mainly, it is Micky Most, who is responsible for Kim Wilde's image. He instructed her to never smile when she was out and always make sure that she seemed unbearable. She also got her hair blonde fierce, one thing that made her blame for copying DEBBIE HARRIS '(Blondie) image, but Kim quickly showed her own individuality and style.

Kim Wilde is actually a distinguished home person, and she claims that she is not a fashion-minded person - something that is in itself a fashionable one. When she is so "anti-fashioned", why did she let her hair color? Kim has also joined the art academy in St. Albans, located just north of London - close to where she lives. Her interest in art had (and still) convinced her that she would teach art. Even now, when she has time for it, she draws and paints, especially portraits.
She does not only play guitar, but also piano. Even she says she is very inspired by classical music and that her favorite song is Chopin's "Prelude". That she is classically inspired is not just to hear if you do not know. Guess what Beethoven or Strauss would have thought if they had heard "Kids in America"!

NB: By the way, Debbie Harris has let her hair get its natural color again! 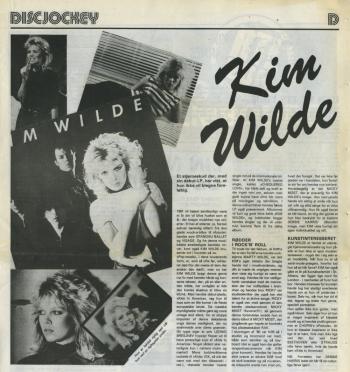