Kim Wilde is the new darling of all England ... She is 20 years old, is the daughter of the great English rocker Marty Wilde, and had the good fortune to know from her childhood a musical environment of the first order: Recalls that music was my first center of interest and certainly my first love ".
She started as a chorister on recordings of her brother Rick, also a musician. Micky Most, studio wizard and boss of Rak Records, hears his voice and decides to take her under his wing.
"Kids in America", her first single, co-written by her brother and her rocker father, is currently in all our charts where it keeps climbing. From synthetic rhythmic to catchy melody, nothing is missing from this perfect production, which is more than 800,000 copies sold in England.
Johnny Hallyday was not mistaken and chose her to be the only woman in her big television show that took place on 13 July. Kim Wilde ... to follow very closely. 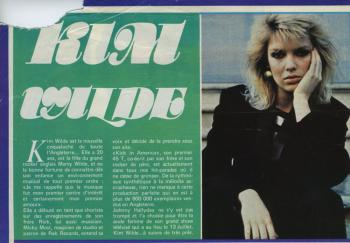