Kim Wilde about her sudden success: 'This is what I've been waiting for'

Success didn't exactly overcome Kim Wilde. She spent a year on art college waiting for a chance. The Wilde family have put their shoulders under things and 'Kids in America' seems to be the start of a promising career in pop music.

It would have been strange if Kim Wilde didn't end up in music. The house of the Wildes, some 30 km north of London was always filled with music. Father Marty Wilde acquired fame in the Fifties and Sixties as a rocker, mother also sang and brother Ricky, 19 and one year Kim's junior, also turned out to be a talent on keyboards and in composing. For Kim it was just a matter of waiting. After high school she had to go to art college for a year, because there hadn't been a suitable opportunity, but Kim says she never doubted that she'd end up in pop music. She was regularly in recording studios from a young age. Together with her mother she did the backing vocals for her dad's records and later for her brother Ricky. It was also Ricky who asked her to sing the song 'Kids in America'. Then things went quickly. "You don't dare count on success", says Kim Wilde, "but I did hope for it. It is all going very quickly now, but I've a feeling that I can handle it. The travelling, the hotels, it's all new to me now. But I have always wanted it, and I think it won't bore me any time soon."

"What surprises me most is that 'Kids in America' is doing so well all over Europe. IO thought there was something like a language barrier, but it isn't that noticeable after all. You don't have to think too much about the lyrics anyway, it's just a pop song."

Since "Kids in America" went to number two in the British singles chart, things have changed in the Wilde household. Kim's career is the focus now. Father Marty has pulled himself from the cabaret and night clubs as an entertainer in order to write lyrics and songs together with brother Ricky. At the moment primarily for Kim, but Hot Chocolate has also profited from their writing talent. Mum does the business side of things. The second single, 'Checked love' is out in England and work is progressing on the new album. When that is out a band will have to be recruited for a live tour. Kim leaves that to brother Ricky, who is responsible for the music. During the interview she looks at the Polaroids the photographer has made before the interview. She is satisfied, she looks good on them, but that is easy when you're good looking like she is.

"How do you like them?", she asks.
"Neat", I say.
"What do you mean?"
"Well, er, decent"
"You mean that I am not nude or that I look too modest. But I am a singer, you know, and not a sex symbol. Of course it is important that I look good, I am an entertainer after all. But I have too look good for women too. Like Debbie Harry for instance, the boys seem to think she's sexy, but she appeals to me too, as a woman and as a stage personality. I want to be a singer above all else and an entertainer and I don't like to be exploited as a sex symbol. But it helps, the way I look." 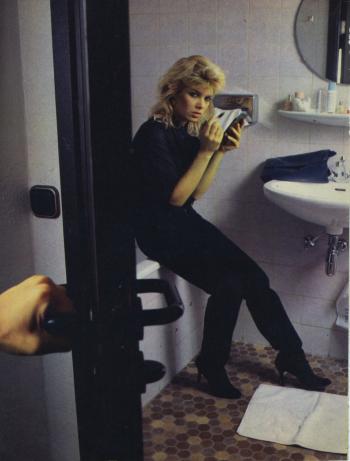 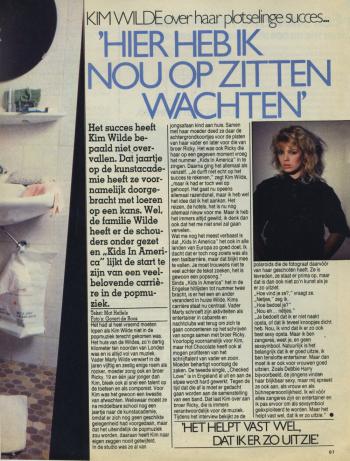