Kim Wilde is in a bright yellow and ultra-brief bikini padding down a Sabal Town House corridor on the way to the roof pool. One of the hotel guests, a Joe Cocker, suddenly lurches out of the lifts and starts talking to her.

She immediately turns a bright red and with a 'oh wow' starts giggling at meeting A Big Name. As she does, the lift doors open and Michael Parkinson disembarks. Not only does she grow weak at the knees but a funny situation occurs with both Cocker and Parkinson talking about different topics to her. 'Oh wow', she collapses into further bouts of giggling. 'I don't believe this is happening!'

Which only goes to show that you can live years with a showbiz family, have two top 5 hits and a No. 2 album in Ye Olde Mamma Country, and do PR trips around the world - and still remain innocent enough to go ga-ga when you run into celebrities. Mind you, living with daddy Marty all these years has taught her the showbiz facade: look as if you're in command of the situation, no matter how nervous you are. That's certainly how she looked a day later when she met the Melbourne media at a piss-up, er, luncheon, at the Grainstore Tavern (Allen Webster turned up with a tag claiming him to be from 'Trotting Weekly'. Er, 'Trotting Weekly'? 'Yeah, I heard she was hot to trot').

Whether or not she turns out to have that instant pop disposability of a Sandie Shaw or New Seekers or does a turn-around and ends up with cult figure status like Marianne Faithfull, remains to be seen. But right now the packaging is very much right. Blonde pseudo-punk hair cut, tight black sweater and jeans, and attractive features which become more so when she smiles. Strictly Wet Dream City.

We start chatting about her musical tastes. In an English magazine in a 'what are your favourite albums' interview she listed Velvet Underground's 'Loaded' at the top, and her taste in singers extended to black R&B greats like Otis Redding and Aretha Franklin. I'd have thought the Bay City Rollers or Bucks Fizz, for Chrissakes.

'Oh, no, my tastes are more geared towards Velvet Underground really. Yeah, it's really funny but when I answered that questionnaire in the paper, I put down that I lost my original copy of the LP and I ended up with three, which fans sent me. I love listening to a lot of black R&B and I wish my voice was good enough to do their stuff. I particularly love Joni Mitchell, I love her voice, her guitaring, her songs, her originality, the way she expresses herself. She's timeless, and I like the way she moved so well into jazz.'

These are not influences reflected in her first LP. How does she think that a reader of Juke would see her? 'I don't know - probably confused. Some people think I'm middle of the road and others think I'm jus ta dumb little Debbie Harry impersonator. I'm neither.'

She flips over onto her stomach and stretches out on the couch alongside the writer. 'Do you mind if I get comfortable?' The writer's pen snaps in half and, breathing somewhat erratically, he digs into his pocket for another. 'Y'know what's really funny? - I expected the English music papers to really slag off my album, but they didn't. They were - well, they didn't gush about it, but they were kind to it, which really surprised me. So obviously they accept I have a role in the scene somewhere, which is positive. And 'Melody Maker' did say that 'Kids in America' was one of the best singles of the year.'

Yes, but people don't expect you to last. They expect that after some time, you'll probably put pop behind you and dive right into cabaret and Christmas pantomimes, like all wholesome broads do. 'I will never end up in cabaret. I mean, some people might not be able to afford not to' (is she getting defensive about papa?) 'but I wouldn't. At the same time, it's not important to become a super-original singer/songwriter who's really well respected and gets written up nicely by the critics. I don't think originality is all that big with me. I'd just like to keep on developing my voice. At the same time I'd like to have kids, get married, and take it from there. I haven't got any great ambitions, to be honest.'

Ms. Wilde, it must be loudly reported here, is not the fashion conscious type. She made her British television debut with a $15 coat bought from the Brotherhood of St. Lawrence-type charity shop she buys most of her gear from. 'I love old clothes, I feel so comfortable in them. You get some terrific bargains at these charity places. I guess I must stand out as some sort of frump because these punk people and New Romantics are into dressing up. But I like being individual. Of course, if people do want to dress up, all the best to them.'

Hey, I'm beginning to warm up to this bird. She's not the haughty, spoilt, pre-manufactured dumbo I'd imagined her to be from the film clips. She ain't no heavy talent, but she does what she does convincingly. Ahh, but how do Kim Wilde records tun out? Does brother/producer Ricky call the shots? Does he throw tantrums if he doesn't get his way, or do you threaten to tell mum?

'Look, I think I've got an okay voice but I haven't got the ideas that Ricky has. I just hate fighting with people and I think the problem with the world is that people are not willing to compromise. I mean, if I feel strongly about something I want to do, we'll talk it out. But I'm the sort of person who hates fighting with people, especially with someone I love, and more so with someone who shares the bedroom next to mine. We're a very close family, a very ordinary English family. I mean, just because I got a couple of hit singles doesn't mean I start getting treated differently. I'm still expected to look after the kids, Roxanne (names after the Police song) and Marty (Marty Jr., named after guess who). I love 'em, but I hate babysitting! I really appreciate my close friends. Dad went through that stage when he had a lot of so-called friends, and then when things went bad for a while, they were no longer around. Next year I'm going with a group of them to America, a sight-seeing visit. Nothing to do with music.'

Now you've managed to crac kmost of the world, but your label manager Mickie Most hasn't allowed the release of 'Kids' in the U.S. as yet. Now, obviously with a record with a title like that, he must be planning some big strategy. 'We go to America next yar, because as Mickie says, I don't want to over-extend myself. I mean, I've had record success in England, Germany, South Africa, Australia, I've got to consolidate myself in these areas. america is a hard place to crack and it's the sort of place you have to do things slowly. Why rush in, trying to become a big success in one country and then face the risk  of being forgotte nin the others? America will be there next year. If the single does bomb, then that's too bad. I don't think I particularly care if we do big business in America or not.'

Speaking to Wilde, she reminds me of the early Hayley Mills days, circa Polyanna and Parent Trap - that British teenage girl cross between naive curiosity and a determination to try out things, just to do them. 'Hayley Mills - that's really strange because that's who my father keeps saying I remind him of. But I don't know about me going into acting. For one thing, it's far too early. I'd like a couple more hits under me belt. I used to do drama at art school and really, at one time, it was a toss up between acting and music, and music won. So I guess I should let myself head for that and do the best I can. I don't think I'd be suc ha good actress, to tell you the truth. I don't think I really have that natural ability for it. I mean, I go on a talk TV show and I just clam up like an idiot and get all self conscious.'

Why do so many big stars' kids end up with real chips on their shoulders, and why do so many of them end up killing themselves? Whose fault is it? 'Well, it's the fault of the parent who brought them up. I mean, you should never allow your kid to ever doubt that you might love him, you should try and always be there. Even if you're away from home, there are so many ways you can show someone that you love them. Ricky and I never once felt unwanted or unloved, although mum and dad are both in showbiz. That's why we both feel close to them now.'

Does she get stroppy about people asking her about her father? 'Oh yeah, they ask how much influence he had on me? Well I either glare at them or ask them how much influence their father had on them. 'Cos really, how can you answer a stupid question like that anyway? It's immeasurable.'

Oh, I don't know, surely the fact your old man's got contacts in the English showbiz must have helped you. 'It might have, but then it balances itself out. Because you're the daughter of someone who's well known, they think automatically you're jumping on his coat-tails and they tend to judge you harsher. So you have to work harder at it.'

For what it's worth, Marty Wilde released a single called 'Abergavenny' in the late Sixties. A bouncy and innocuous pop song, it became a hit in one country alone. Yes, you guessed it, Terror Orstralis. There's a moral in there somewhere. 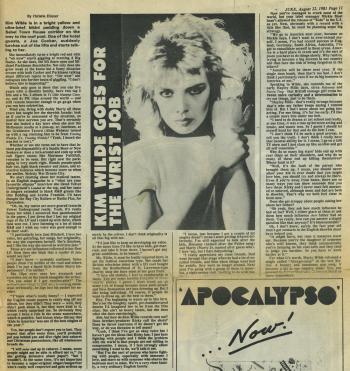