Kim Wilde: 'I now do what I always wanted to do'

After two singles the Wilde family can already rake in the profits. And they haven't had enough of it yet. Father Marty and brother Ricky are already making plans to make Kim famous in all corners of the world.

Kim Wilde is very nervous. I am one hour late. And she has been been nervous for an hour. Later it becomes apparent that she is always afraid of interviews. "You have to be so careful of what you're saying. Journalists undress you with their questions". She very cool and brief, Kim Wilde. Probably because her record boss and discoverer Mickey Most has said to her that all journalists are little devils, but that interviews are an unfortunate part of success. And success she has: in the whole world it's raining gold discs, for her two songs: 'Kids in America' and 'Chequered love'. It's a question of time and then her debut LP will also be awarded. "I am happy with that LP because I showed that I can sing all kinds of music. No, I am not afraid that I am pushed in the rock bracket because of those two hits. There'll be more hits, you know."
Before us on the table in the wondrously silent chamber of the RAK office is her first acquisition. A gold single for 500.000 records sold of 'Kids in America'. A question follows naturally, one that she expects. What does she feel when she looks at that?
Kim is lost for words for many seconds. She asks for a cigarette. Then: "I don't know. It's so strange. 500.000 people have bought that single. You can hardly grasp it. It's a lot. And then it's just America. Imagine I would have to shake hands with all of them, those 'kids' in America..."

The family conspiracy Marty (lyrics), Ricky (music and production) plus Kim (vocals) has brought M. Most's record company a lot of success. The whole business (16 people) is based on the Wildes success, because beside the occasional Hot Chocolate hit - a band that the family Wilde has also delivered material for - it's all over for the other artists (Mud, the Sweet, Racey, Gary Glitter). Says press promotor Sonja: "That's the politics of RAK. Betting on one horse brings you further." And the horse runs on. Says Kim: "The next single is coming. We just go on, that's the best thing to do."
Isn't she afraid that it's all over one day?
Kim: "I'm not concerned with the future. I don't think ahead. I live now and it's all about that. Musically, I do think ahead. What kind of songs need to be on the album, and so on. But for now every day that goes well is good. I work really hard, you know. I get up at 9 and concentrate fully on what's coming. Whether it's photo sessions, radio and tv performances, everything needs to be perfect. This interview too, if it's not good then it's me who is to blame. "
Is it good?
"Yes, this is a good talk. I've got the feeling I get to know myself better because of good interviews. Everything is educational. You get used to things."

Kim was drawing a few years ago under the light of a lamp, now she's beneath the spotlights. And Kim is still saying that she misses drawing.
"But that's really true. Whenever I have a pencil in my hand I can feel it again. I had to give it up. And I can always go back to drawing. It's much less a temporary thing. At some point this will take its toll physically, then there's always the drawing book. "
Has Kim had to give up more than just drawing?
"Yes, going out and meeting friends. There's so little time. You have no idea how much time is consumed by my career. "
What consumes time?
"I said it: photo sessions, interviews, radio, television, recording. I rarely have any spare time. I go to bed early because I have to get up early."
What is success for Kim Wilde?
"Success is... being really happy because I can do what I always wanted to do. "
Did you used to be jealous of your father and brother who have worked in the pop business?
"No, I wasn't. I knew I wanted to sing. And my father and brother knew that too."
But it wasn't their intention to exploit you?
"Not really, my qualities had to do it, not my family connections."
But the family qualities must have played a part in it, or not?
"Yes, but did you think I got a record deal because I'm Marty Wilde's daughter?"
Who knows!
"I can prove to you that it's not true. Mickey Most discovered me when I did some backing vocals for a recording, so..."
So that's the end of that misunderstanding. Something different, then. You are often compared to Debbie Harry. A problem?
"No, rather a compliment. She's known as a good singer. I don't pretend I reached her level of quality. Also, the comparison is ridiculous. I do very different things."
Such as?
"It's different music. Different styles. I want to record a country song. Country music is beautiful."
Aren't you afraid that buyers of 'Kids in America' and 'Chequered love' will start to think: 'What is she doing all of a sudden?'
"As if the record buying public only likes one type of music. I don't believe in that."
How much are you involved in the creative preparations?
"I give ideas for songs, not more than that. Dad and Ricky know what they're doing, so why meddle with that? That's their business."
You don't consider composing yourself?
"I would like to write lyrics..."
But then your father is out of work! Do you think his lyrics are oldfashioned?
"Not at all. My father knows me really well and knows how I think. Being oldfashioned isn't connected to age. And what are oldfashioned lyrics anyway? 'Chequered love' is pretty modern."
You don't think about the future, but do you have any idea how it will turn out for you?
"No." 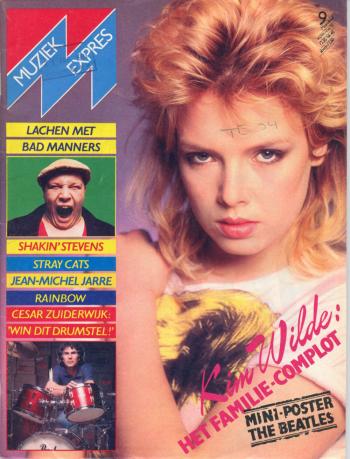 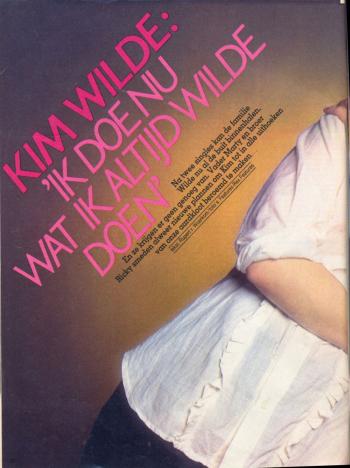 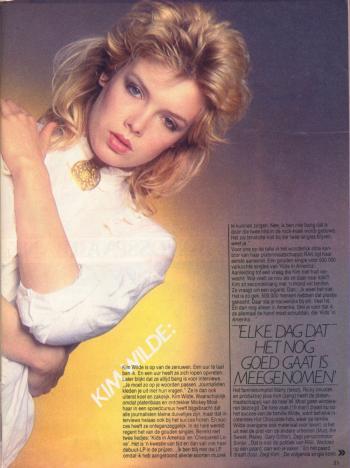 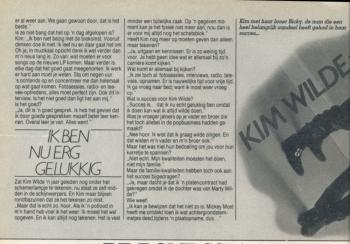 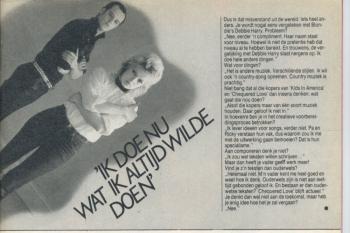