Like a comet the blonde English singer Kim Wilde has shot up. Her first single, 'Kids in America', even reached the first place in the European charts, but her second one, 'Chequered love', is getting towards that place. For Kim herself it is no surprise: she has always known that she would become a star.

Kim may look great on television, during the Hitkrant Interview in London the singer looked more like a member of a punk band. 'This way I'm not recognised', she explains.

Have you always wanted to become a singer?
I don't know why, but I have always known that I would be a singer. I never calculated other possibilities.

Why did you never realise something as a singer before?
No-one asked, not even a group wanted me. They probably felt I looked too much like Debbie Harry. It never worried me, though. I knew it would happen sometime. And when it happens, it has to be good, not halfbaked.

Who offered you the first recording contract?
My brother Ricky had written a song with my father and they asked whether I would want to sing it, so that they could hear for whom it would be suitable. I recorded it within ten minutes and everyone was enthusiastic. 'Why don't you record it with Kim?', people in the studio asked. Dad and Ricky never even considered it. That's because I never said I wanted to be a singer.'

Why not?
Because my father used to be really famous. He made big hits. When you say you want to become a singer, no-one takes you seriously. Just my mum knew. Father never talked about it.

What is good about this job?
Meeting people, meeting interesting people. You don't meet them when you work in an office. I'm just very lucky to have a career of my own. That's how you meet even more people.

One reads a lot of stories about you and your father.
I would be very angry if he had nothing to do with my records. But he does, he writes the songs. But we don't do interviews together anymore now. It's about Kim Wilde and I don't want to be daddy's girl.

Do you have more brothers and sisters?
I have a three year old sister and a brother who is five. And Ricky of course. He used to be in dad's band. But he prefers studio work to being a popstar. He can't understand I wanted to become a singer.

What music do you like?
Many different styles, I just love music. Just to name names: Elvis Costello, Tenpole Tudor, Amii Stewart, but only her voice. But also older groups like the Supremes. I am influenced by black female singers, I like Aretha Franklin a lot. They thought I was American at first.

Why don't you ever smile?
I don't know really. There are pictures of me smiling, but I don't want to be the blonde sex star. People think laughing blondes are dumb and I think I look better when I don't smile.

Are you building an image?
Not really, no. My music is my image. Everything has to go fast with me. I take ten minutes in the studio to sing one side of a record. Dad and Ricky know exactly what I can sing, so there is no problem. I don't understand that there are singers who take a whole day for one song!

Are you involved in production at all?
I am always in the studio when they are producing. It's my record and I want to have my say. The sound has to be what I like to hear.

What will your first LP be like?
That's a problem of making records: it takes too long. I am working on the second one and the first isn't even out yet. But I like the first one a lot.

Can you handle criticism?
Not at all. The English press has slammed me, that is their habit. You have to do concerts before they take you seriously. And I have never performed yet. But I don't let it get to me.

Are you going to do concerts?
I am busy rehearsing right now. I am going to tour with the guys who are doing television performances with me. During tv-performances I am never nervous. I have done a lot of photo sessions and I know how to look good; I use that. But I don't know whether I will be nervous before a concert! 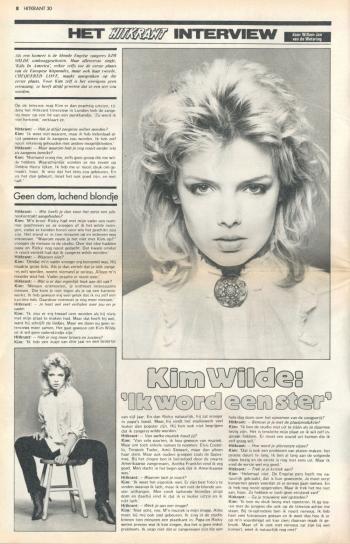 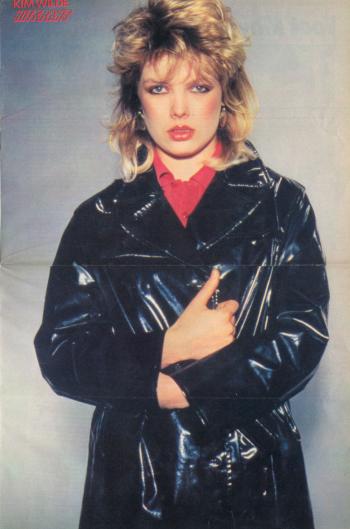