The British rock singer Kim Wilde is coming to Portugal on December 5 to promote her first, self-titled LP.

The singer is coming to Lisbon to participate in a programme of RTP and various radio programmes and will speak to journalists.

Kim Wilde is the daughter of famous rock singer Marty Wilde, one of the precursors of rock in Great Britain. "Music has always been an integral part of my life.", says Kim Wilde.

Her first success at the beginning of 1981 was "Kids in America", a single written by her brother Rick. A few months later, Kim Wilde released "Chequered Love", another single from the album.

All of Kim Wilde's material is already published in Portugal, with the exception of his latest single entitled 'Cambodia', which will be released when he is in Lisbon. 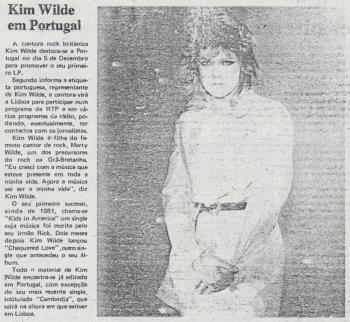