Her last year at the art academy was largely lost with the restless staring at rustling lovers outside the classroom. In the brain of 20-year-old Kim Wilde, it became increasingly clear that her artistic future lay in the artful use of her vocal cords. It was therefore not surprising that after the recording of 'Kids in America', eraser and pencil sharpener disappeared permanently into the drawing box to make way for microphone and TV cameras.

This transition did not come out of the blue for Kim. Her slightly younger brother Rick played the piano with an occasional piece of guitar, while father Wilde sang song after song in another room of the parental home, which justifies the conclusion to speak of a musical family in this case. Kim's father is Marty Wilde, who is best known in the 1960s, and who still performs with great success in England.

Kim: “Last year, Rick asked if I wanted to participate in a background choir in the studio. Coincidentally producer Mickey Most was present and he liked the song of Rick, Kids in America, as well as my vocals very well, so that a single was made immediately”.

It is hard to imagine a more successful start, because in every country where Kids in America is released, this song rushes through the charts. For the time being, Rick and Kim limit themselves to radio and television recordings, but next year there are also scheduled tours. “Kids in America is being released in stages, so that we can provide the song directly with TV recordings in every country. Because we first want to gain the necessary experience in Europe, we will not go to the United States for the time being."

The experience of Marty Wilde is of course no stranger to this business approach. During Kim's travels, she is assisted by Rick, who for the time being has his own career put on a soft fire to help his sister in these "exciting times".

Despite her lack of experience, Kim still radiates something of routine and security. "Don't forget that I was already on stage as a baby, although in a carrycot, but as I got older I experienced all the prosperity and adversity of my father very closely. We talk a lot with each other and that is why I see singing mainly as a profession in which you have to work very hard. ”From an early age Kim wanted to do something “artistic”, but at first she was dreaded the restless life of an artist.

"I saw the art academy as a compromise, but in the end the vocal cords pulled more than the crayons." Kim still lives at home, just like Rick, and I want to keep it that way for the time being. "I want to do the job so well learn and who can guide me better than my father? "

So like to sing, and as good as possible, but the aspect that normally gets a lot of attention, namely the sparkle and glitter of the "star", can make little impression on Kim Wilde. "I saw it with Dad, the glamor lasts for a few minutes and then everyday problems usually come up again. That's why I don't see myself walking beside my own shoes. Besides, I would really argue with him!" 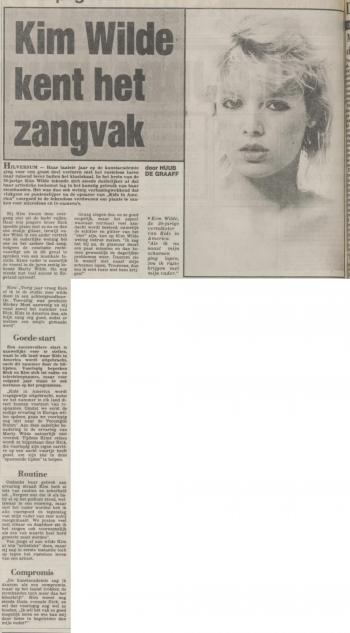