Even the pop industry has its family businesses. One of them is Wilde. A small and pretty well-run company that was started by Marty Wilde in the '50s. Marty was one of those dark curly gentlemen who were later seen in the movie Grease.
Marty got a hit with Teenager in Love, became the father of three children. Two of them managed dad Marty's "tone dream". First, it was Ricky, who sang I'm an Astronaut, and became England's contribution to the family the Osmonds.

Then, it was the middle child Kim's turn. She would not really be a star if showbiz was her given work area. Kim became a star by accident. The real pop dream, which was fulfilled by mistake. Because when little brother Ricky was in the studio to take care of his own career, Kim was there to sing background vocals. Ricky had some studio time left and let big sister Kim try to have a go at a song he had written and Marty had written a lyric for. Kim sang Kids in America, and England's answer on Bert Karlsson, Mickie Most, heard and saw the girl. He rushed out and shouted: a hit!
Such a feeling Mickie Most had in his fingertips. And he was right.
Kim Wilde got her hit on the same way as another 'legend', Elvis Presley, during a leftover studio hours.
Now Kim Wilde has released two singles and an LP. On Sunday, she completed recording her new single, Cambodia. Since she has been flying around Europe. Gets into the television studios, mimes to Cambodia, responds some mostly polite questions and travels on.

Yesterday the siblings Wilde, Kim and Ricky, came to Malmö. Out to Jägersrovägen, into the TV studio, talk with Lena-Maria, mime to Cambodia and out to a bunch of wide-eyed men. The region's journalists. Writing and photography. Kim took it easy. She is quite down to earth and confident by nature. She looked into the room where the journalists sat. Disappeared and came back. With brother Ricky.

Do you know where you are?
Yes, replied Kim and looked down at the floor. In Copenhagen... No! In Sweden, I mean.

Kim Wilde preferred, for so long, to communicate via video and TV. Perhaps because her career went so quickly. For a year Kim Wilde has been a "gramophone artist".

Video is an important part of the business right now. But in May 1982 , I hope to start touring with my group , she says.

Can we say that Kim Wilde brought up to become an artist?
I have grown up in such an environment. That affects me of course. But I've always liked to sing, always wanted to develop the area. I have been brought up by an entertainer.

Kim Wilde has become something of '80s symbol of an era in pop music, then it was pro who wrote the songs, then they pick the appropriate face on the street to sing. As with Phil Spector and the Ronettes. The best parts assembled and not like today: the artist sings, plays guitar and writes the songs themselves.

In England it is Kim Wilde on one side and slightly more extreme and older Bette Bright on the other. But both continue where Dusty Springfield and Sandi Shaw left off. Undemanding chartpop intended for fast comsumption. Pop music, like beautifully packaged candy.

Ar you most a surface, Kim Wilde ? A sex symbol on today's market tone (parallel to Brigitte Bardot 's course with all the articles you can read about Kim Wilde)?
I do not get angry when journalists come with this question about seximage . But I see myself as a singer, that's where I have ambitions. Not like a "second-hand Brigitte Bardot".

But sex is an important part of an artist's image. Adam Ant, Debbie Harry or Siouxie (and The Banshees) , they are sexy. It's part of the show - and that's hardly anything wrong with that.
Ricky pulls into the discussion :
With Kim, we have tried not to get caught in a sound, in a specific fashion or an image. We'd be stuck in a genre that is over when fashion changes. Kim has a voice that does well through all the trends, says Ricky and Kim looks away, embarrassed.
Ricky himself will commit his time on Kim. He produces her records, writes songs for her and plays keyboards in her group. As a soloist, he has no great ambitions. He has done his part as "astronaut".

And dad Marty, today 42, will be at their side. Taking care of businesses, giving advice, and writes the lyrics. But isn't Marty too old to do fashionable pop lyrics?
No. We 've always done things together. There is no generation gap between us. Dad has a very young heart, says Kim. 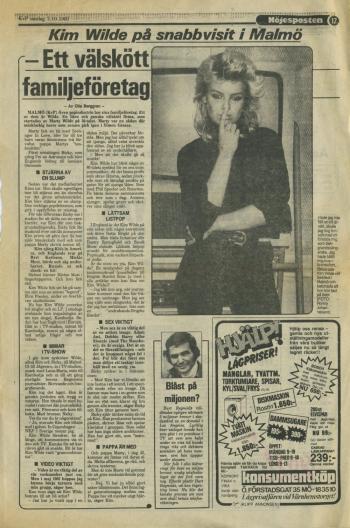