Kim Wilde overcome with marriage proposals, but music is her only love

'When you are the daughter of a very famous siner like Marty Wilde you're one big step ahead of your main competitors. Next to that my brother is so talented that e has always given me the right sort of advice from the beginning and he's also done a lot of work musically. Dad and Ricky have given me just enough of a headstart to make it in the fast music world.'

The platinum blonde Kim Wilde has just turned twenty and is still unprejudiced about showbusiness. In September of last year she recorded her first single, 'Kids in America', but before it was released some time went by.
'We wanted to have the best contract we could get', Kim explains. 'That is especially difficult in England these days. But dad and Ricky have hauled 'Kids' around long enough until we could have a good deal.'
Mickie Most was the man they ended up with, the famous owner of the RAK label on which Smokie, Mud, Hot Chocolate, Suzi Quatro and many other big stars could be heard. 'Mickie heard our tape and just said: Go and record it. That is exactly what we wanted ourselves. Dad gave him his demands, but Mickie just said: Go and record it!'
From Most they got the studio and the best people from his staff. The result was a cracker: 'Kids in America' became a big hit in England, where it has been succeeded by the new 'Chequered Love'. Now Belgium and the Netherlands get their turn. The speed in which everything has happened, has dazed Kim for a while.
'I was just surprised about everything', she says. 'Before I got interested to do something in music myself, I just saw it as dad's profession and later on Rick's. Now that I'm in the business myself, I feel overwhelmed. A few months ago I was singing at home and now I have to go to Japan because the record is becoming a hit over there too. The Japanese eat this kind of music, I've heard. In two months time I have visited four countries, sang the song over 40 times in front of a camera, seen moer than 200 photographers and gave some 400 interviews.'
In between Kim has also recorded her debut album, an album she's very proud of. 'It has become a very special album', she says. ''Kids in America' is on it, but also very different songs. Dad and Ricky have made all the songs in two weeks time. There's also some reggae oriented work on it. It is a privilege to work with these people, even if that sounds strange because it's your own family you're talking about.'

Before Kim started in music, she was into painting. This happened on Saint Albans College and this art college was her inspiration to go into music. People who have seen her work, say that she's very good at making portraits and paintings with a lot of movement.
'Still it's not exactly what I've learned at art college', explains Kim. 'I learned, even more than at home, to appreciate music in all its facets. The strange thing is that most students wanted to get into music at the time. I made it. I don't think I'm terribly good at drawing and painting. I do like to sketch, but music speaks to me a lot more. It's my one and only true love.'

And Kim is planning to keep it that way for a while. She has gotten a lot of fans in a short time and the mailbox of RAK records is bombarded with letters of enthusiastic writers, both male and female, who want to know more about her. A fanclub has been started too. 'I have laughed about all the marriage proposals', she says. 'It has been 34 until now. It's a lot, don't you think? I am not planning on answering them all. It's a bit strange to propose someone because she looks good on television, don't you think? I do feel sympathy for people who are so lonely that they start writing letters like that.'

The fact that she doesn't want to answer them doesn't mean that she has become arrogant. 'I just hope to stay the way I am right now', she says. 'I don't like being an arrogant star-type. Dad never did that and partly because of that I've had a great childhood. Otherwise children in school and in the street wouldn't have gotten along with me anymore. Now that he's stayed normal, he's made me happy in my childhood. I could always take friends along to our house, without asking first. I have been able to grow up without problems.'
A happy childhood, hopefully a bright future too. Kim thinks so. 'What can go wrong', she asks. 'I have a hit, two in fact, a great record company, a great writers team and soon a band to play live with. You must be happy as a singer with all that? It will take some time before I start giving concerts, though. Mickie Most and dad are planning this thoroughly. The two are auditioning for a good band and picking the right venues. When that is done we will start playing live. It may take until the end of the year before Kim Wilde starts playing live, but that it is certain that Belgium and the Netherlands will get their turn too. Together with my own country the people here have taken me into their hearts and I want to reward that.' 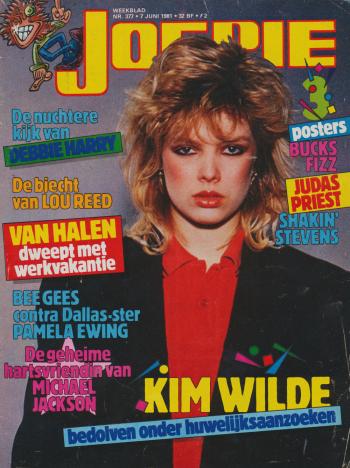 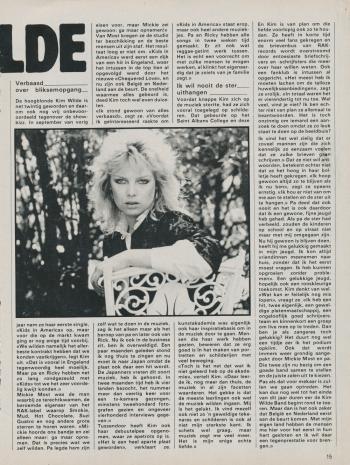