Kim Wilde: She likes her home life and her goldfish pond

The Face of 1981 rotated amiably at the bidding of two eager photographers. Blinking in the flashlight glare, a wide-eyed teenage girl savoured her prize of a day with the pop star, courtesy of a magazine competition. And as I jostled among record company executives and satellites of the young megastar, it became clear that seeking a private audience with Kim Wilde these days is about as optimistic as planning a night out with the Princess of Wales.

The familiar accoutrements of stardom have been bestowed as a matt of course on the hottest 20-year-old in Britain. A year ago, Kim spent her days cheerfully coping with the incessant demands of baby brother Marty and her two-year-old sister Roxanne. Now, after a string of top ten singles and an equally fast-selling debut album, the minder is herself being minded. She accepts the situation with a characteristic shrug, staring me full in the face with those baby blue eyes.

"Yes, it's been an incredible year. When we released 'Kids in America' I didn't expect anything special to happen. I just hoped things would work out. It sounded like a hit record but you can never tell. In fact, it was almost an accident that I sang on it in the first place."

Accidents don't come much happier. Kim had been singing more backing vocals in the studio and cut several demo discs. For fun, she had also spent time on the road with her Dad, rock 'n' roller Marty Wilde, who still tours the country reminding fans of hits like 'Teenager in Love' and 'Endless Sleep'. Kim's brother ERicky, 19, was writing songs and attracting interest from RAK Records, the brain child of pop Svengali Mickie Most. Mickie just happened to be in the studio the day Ricky was laying down 'Kids'. He watched and listened as Kim gave the song a preliminary airing... and signed her on the spot.

Said Kim: "It could easily have been Rick doing the vocal. But now we work as a family team. I sing, Rick has the last word on production and Dad is there in the studio with the ideas. He's really great on sounds - he'll hear something on a track and know just how to bring it out. The three of us each have a totally different approach to recording, but it works. It really is a family act."

Sex symbol? "I don't think about it"

Even Mum has a vital role. Marty's wife Joyce is no stranger to showbiz, having met him when she was one of the leggy Vernon Girls singing group in the 60s. Now she ploughs through the mountain of mail which daily pours into the Wilde home in Welwyn garden City, Hertfordshire, demanding facts and info about her delectable daughter. The work is obviously appreciated.

"Running my fan club is a really hard job but Mum makes sure it all goes smoothly and looks after the business side of things, which I don't have time to do", admitted Kim. "It's been an unbelievably busy year. The Records have been doing so well that I've been round the world on promotional tours to meet the press, radio and TV people. I've visited South Africa, Sweden, Germany and Finland. And I did a non-stop round of interviews in Australia for ten days which left me absolutely draiuned. It's not always a barrel of laughs but it's my job, and everywhere I've been we've had a really good reaction."

She paused to display a perfect profile for another clamouring lensman. the peachy complexion and pouting lips once more captured for posterity, I wondered aloud if she was bored with the "new Brigitte Bardot" label. A flicker of irritation momentarily clouded her features before The Face reverted to cover girl repose and she replied: "Physically, I'm very flattered but I don't see that looking glamorous is the ultimate in a girl's life. Every woman's allowed a certain amount of glam, and I'm keen on fashion because I studied at art college before I became a singer. I haven't really got a lot of time to be glam. I'd love to be more inventive but I always end up wearing jeans and a T-shirt. I love 50s clothes but I've got to be careful. If I suddenly start looking too girly I'll get landed with a girly image."

Jeans or no, there's little risk of Kim Wilde being mistaken for a bloke. She possesses that impressive aura of confidence so characteristic of the new breed of girl singers. She explains it by saying that women generally are more confident in themselves. And on a personal level, she has had to learn very fast and adapt. Once the bandwagon of success began rolling, it was right foot flat on the boards and straight into overdrive.

"We don't hang around. 'Kids in America' was made almost in a day. The first album took only six weeks to record. I don't like spending too much time on songs because the English music scene is so changeable and our charts are very instant", added Kim. "I've been working hard on the second album and we've had more time to think about it, so it should be even better than the first."

As the dust settles on a fabulous initial year which has established Kim as a household name in most of the world's major territories, she's looking forward to new conquests in 1982 with her feet still firmly on terra firma. Does a happy home life help to keep things in perspective?

"Well, I certainly appreciate my family and friends. Mind you, I'm under no illusion about marriage just because my parents have a good relationship. The media love to give me a sex symbol image but I don't think about it a great deal. I don't reckon I've changed a lot. Most of my friends date from way back at art college and from school before that. I like living at home and for relaxation I go out walking or spend time in the garden with a goldfish pond that I built with some mates. As for the future, we've still not attempted to break through in America, but that's a tricky hurdle and we'll probably leave it till last. The big thing next year will be my first concert tour. Mickie Most didn't want me to appear before a live audience until I was ready but we're now planning a major tour, probably in May. We owe it to the people who have bought the records. I might be a bit nervous to start with, but if Ricky and Dad are there it'll be fnie. I just love singing. I wouldn't mind doing a duet with soemone - Elvis Costello, perhaps. Whenever I hear a song, I automatically sing harmony. If I hadn't made it as a solo vocalist I'd probably have been a session singer."

More immediately, Kim's looking forward to a skiing holiday in January with a gang of friends. But when her public beckons and the Wilde bunch finally hit the road together, the bright young front person of the family won't be putting on too many airs and graces.

"It'll be T-shirt andjeans on stage, I suppose", she mused. Then, with a dazzling smile, she giggled: "My natural hair colour is pure mouse. But I couldn't handle looking mousey at art college and if you wear things like jeans you need something to top it off. My friend had already dyed her hair black, so I did the opposite. Now the kids at art college think I've gone punk... but blondes have more fn!" Pretty Wilde, that. She'll do for 82. 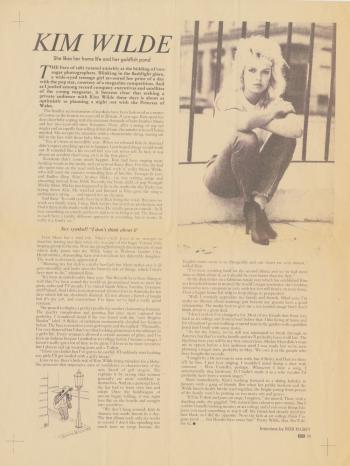