It was in January of this year that a young Englishwoman with more sparkling hair than a gold bar came to the attention of everyone: Kim Wilde. The single "Kids in America" ​​immediately launched it into orbit. His success is due in part to his father, because the Wilde family is not unknown to the rock battalion. Marty (the father) was one of the first English rock idols, and the mother (Joyce) was one of the Vernons Girls who appeared in the show "Oh Boy". Finally Ricky, current producer of Kim, tried to become a kind of Little Jimmy Osmond English a few years ago, pushed in this by his sire. But the company encountered a blistering and deserved failure, and Ricky is now satisfied to officiate in the golden shadow of his sister.

Long before the Beatles, and even before Cliff Richard, Marty Wilde aroused the passions of young English people. Born April 15, 1939, Reginald Smith started a skiffle group, the Hound Dogs, at the age of 16, then turned to rock like everyone else. He was discovered in a coffee bar - where he regularly appeared - by the greatest impresario of the time: Larry Parnes, who renamed him Wilde for the scene. Marty begins recording in '57, performs in public, appears in the first English rock TV show: the "6.5 Special". It is his 4th single "Endless Sleep" (cover by Jody Reynolds) which gives him his first Top 10 hit in the middle of 1958. He obtains other very big hits the following months: "Donna" (by Ritchie Valens), " A Teenager In Love "(from Dion and the Belmonts)," Sea Of Love "(from Phil Philips). As we can see nothing but covers: at the time the English producers urged the artists to take over the American hits, whose original versions were neglected in favor of the often weaker English covers. "Bad Boy" however, in '59, was an original hit for Marty. It was even a small success in the States. At that time he was often seen on TV, notably on "Oh Boy" and he presented the show "Boy Meets Girl". A few more hits: "Rubber Ball" in '61 and a very good "Jezebel" in '62. After that, her star bearing, Marty devotes herself to songwriting, production, and turns in some films. Some unsuccessful records, except perhaps a small piece of variety with which he participated in the European Song Cup Contest in Knokke in 68: "Abergavenny". In total, a prolific and eclectic artist. His' 50's records can not be considered "essential" since it is generally a "cover version", and he did not really have a very personal sound, unlike a Cliff Richard for example. Nevertheless he leaves excellent records, like "Put Me Down", "Down The Line" or "Donna". To (re) discover, for example on the Swedish compilation "The Wildcat Rocker".

Born in '61, she was an art student. In addition, she often served as a chorister to her father on stage. At least two versions circulate on his debut: Ricky having heard tapes with his compositions to the big boss of Rak, Mickie Most, he is invited by the latter to record them. When Kim enters the studio to do the backing vocals, a dazzled Most exclaims: "No question of backing vocals! Kim Wilde was born!"

Marty was unable to complete his recording session, Ricky (producer) uses the time available to him to have "Kids in America" ​​recorded by his sister. Anyway, the song (composed by Ricky and Marty) is number 1. Huge success for the following two singles: "Checkered Love" and recently "Water On Glass". A first album. His music is modern pop, but with a pretty rock dimension. She sings with a tangy and very "catchy" voice. On the album, most of the tracks look like the three singles, but on the other hand, "Everything We Know" presents a clear reggae tendency and a languid Kim becomes almost a second Debbie Harry! The character of Kim Wilde can please several categories of people: false punks who appreciate the rock side, and disco people who must like the distinguished and "class" side of Kim, striking on certain photos (published in newspapers, not on the record covers!). In any case, his immediate but non-urgent music is widely hyped by the media-active (admire this beautiful winter collection of neologisms, the last city being one of the most grotesque of the whole post-war period). Now of course, she is summoned to explain herself. The NME recently devoted a cover and a great article to her, but did not even think of asking her her musical tastes (another source informs us that she likes 50's rock and rockabilly, Aretha Franklin, the female groups of Tamla Motown, and for '81 Costello, Bowie, Madness in particular). In the interview with the NME, we type tirelessly on the same nail: the fabricated side and possibly "cheap thrills" (sex-appael seller of records) of her music. Is it a show biz toy? "No, I have a lot of faith in what I do. The sexual aspect of the video for" Checkered Love ": no, this sexual aspect is not the most important, otherwise it would be dressed in sexy attire and she would launch fully into the operation "ignition". But these words of "Checkered Love" ("Touch me, do what you want to"): no, we laughed with that. It's just a good song, with lots of energy. I love to sing it. " So Kim Wilde is not primarily a phenomenon related to sex? No, at least not entirely. People think of her what they want. Nothing to do: Morley the obtuse still attacks 3 or 4 times this aspect of Wilde. She can only repeat the same arguments, and add that the sexual energy emitted by the woman is powerful and depends on the personality more than on clothes: Kim sings for pleasure, she does not take it all seriously, and she has time to develop. So its "plastic" side does not bother her (all the compositions are by Marty and Ricky, she does not yet feel able to write). And all this "dissequeur" side - and advertising - does not interest her. To the question "Do you think you are beautiful!" she brings this wonderful answer: "Inside or outside? (...) I don't think I'm perfect and I don't consider myself very beautiful, but I'm not ugly inside anyway". What interests her: awareness of herself, what is going on around her: she would like this mentality to be reflected in her music: simplicity. What if success stops? Whatever? She would become a chorister again. Kim Wilde is very beautiful, but she also radiates charm - in any case, my personal atoms, which become hooked in front of hers, whispering to me. Such a personality is sheltered from the impostures of success (or its absence), and it very pleasantly changes the sinister and pretentious nullities which clutter the rock scene, artist side and public side. 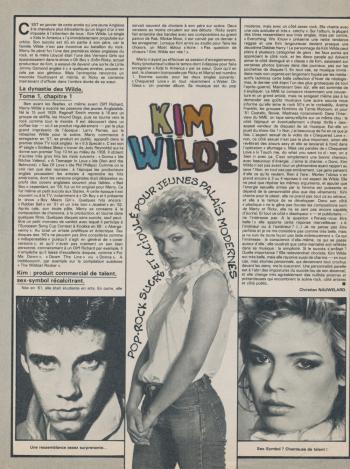