"You will never see me smile on photographs. That's an idea of my producer Mickey Most. He once saw a few pictures of me and said: Kim, when you don't smile, you have something mysterious. We can sell that. Since then I stopped smiling before the camera. Pictures of a laughing Kim will probably become a rarity."

A quarter of a century ago promotor Larry Parnes found a man singing for beer and sausages in a London rock and roll-café "The Two 1's". The young singer introduced himself as Reginald Smith. He was one of many young people who, encouraged by the success of Elvis Presley, picked up a guitar and started singing rock and roll songs and pop ballads in London clubs. Parnes changed Reginals name into Marty Wilde and gave him a recording contract. A year later, even before Cliff Richard and Adam Faith, Wilde became a rock idol in England.
Some twenty years after Marty had his biggest success on that wet island, another Wilde is at the top of the English charts: his beautiful daughter Kim Wilde. According to the English rock press the English answet to Deborah Harry. Her debut single "Kids in America", a composition of her father (lyric) and brother Ricky (music), just missed the top spot. It was kept off it by "This ole house" by Shakin' Stevens. "That second place was high enough", according to Kim, "it makes the challenge for the next song bigger."

She is only twenty springs young and has coloured her hair blonde just like Deborah did. Because it looks sexy. Her heart-shaped face is a fraction less perfect than Deborah's, but the sensual vibe is strong. Although barely mixed with refinement. Only when she poses she is cautious. Kim speaks with a soft, melodious voice. Direct questions sometimes make her shy, just like little compliments. Then something of a smile appears on her red lips and a light blush forms on her cheeks. Kim is a dream of teenagers in the flesh. Or, as some young passing stranger remarks, 'a chick to bite in'.
"You want to know how it went", the 'chick' smiles after a very tiring day before the TV camera's in Hilversum. "Well", I say, "since we're sitting here...".
"You understand that I got showbiz in the blood. Dad did really well when I was young. In the first two years they did get him financially. But after that he managed to save up really well. When I was six he bought a house in the country. That's where we live now."

"Since I was twelve I have been in recording studios. Singing demos for my brother Ricky, who is advancing well as a producer. And as a composer. The new single of Hot Chocolate is written by him. Via Ricky I got in touch with Mickey Most, the most successful producer in England. He wanted Ricky to do something with that voice of 'his sister'. But dad felt I was too young for this business. In order not to go against him I went to art college for a year."
"A year ago I went with some recordings to all the record companies. We'll call you, they said. They never did, of course. Understandable, because on hindsight, those recordings were dreadful. With 'Kids in America' we were right on the mark. Ricky produced it, while Mickey watched over my shoulder. Dad and Rick yhave written some 15 songs for the LP. Call it 'comtemporary pop'. There's something for everyone: new wave, reggae, some ballads. I only do television for now. I will go on tour with my own band early next year. Rickey will be there. It's nice to have someone you know along."

"I think the comparisons with Deborah Harry and Brigitte Bardot are compliments. The rock press is in the hands of men, and they see things like that, I guess. I try to look good. The package is important in this business. And rock and roll has everything to do with sex. When boys want to daydream over my picture, they can.
The success does isolate me from my own friends. They become shy. It's not right. I haven't changed. But that's, I fear, the price to pay for fame." 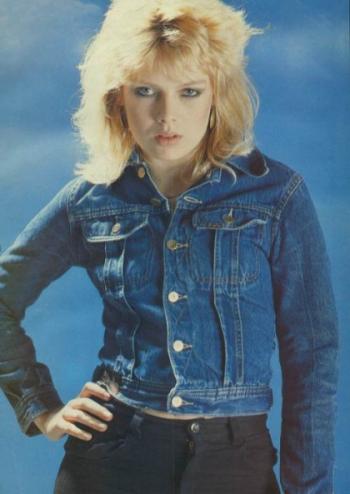 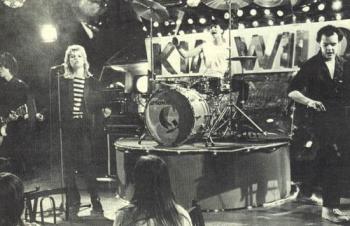