Kim Wilde the plain girl everyone wants to look like

There are many famous singers and actresses, but female idols are rare, strangely enough. But maybe that's not so strange. It's logical that girl tend to project their romantic dreams on some handsome boy, rather than girls, who with their glamour and beauty evoke complexes and jealous feelings. And boys usually limit themselves to approving or disapproving the very existance of an artist, but reserve their superlatives for the cool guys, the hard rockers or the sophisticated gentlemen. But there are always exceptions, of course. Take for instance Kim Wilde. In just a few weeks time she climbed to the highest regions of the charts. With "Chequered love" she succeeded for the second time. And then her debut album proved that she's not just another three minute hitwonder. Her third single "Water on glass" selling less well is just logical because the song can be found on the album already. That doesn't diminish the fact that Kim Wilde has become a real idol, admired by both young and old and by both girls and boys. Curious about the reasons for this sudden success Blondie started exploring, first with the fans, then with Kim herself.

A hit represents the sales figures, i.e. the commercial value of a certain record, but doesn't say whether the audience has actually found a new idol. The many letters we receive are a better indication. One reader in five says that they love Kim Wilde and consider her hairdo as ideal. The same phenomenon happens in our "your photo on our magazine cover" competition. "A simple hairdo but still special", Inge from Breendonk describes it. "Nice and wild, but still neat", says Patricia from Sint Niklaas. "Young, modern without being too extravagant", says Bea from Brugge about Kim's hair.

Hilde Goossens from Kessel-Lo, herself a hairdresser to be and not shying from experiments with her hair thought she'd like to look like Kim Wilde. And we would be happy to oblige. A few appointments later Hild was on our hairdresser's chair. Everyone became enthusiastic about the metamophorsis. It was like Kim Wilde materialised before our very eyes. The make-up, which is responsible for the look provided the finishing touch, and it seemed like Kim Wilde had gotten a new sister...

A nice hairdo is one thing, but Kim has a few other trumps up her sleeve. She is pretty, but not an unapproachable beauty like for instance Bo Derek or Farrah Fawcett. Girls don't feel "threatened" by her, which rules out complexes and jealous feelings. And then there's the whole attitude of Kim's, which is attractive. "I believe that I am considered to be the attractive average of what young people aspire to be these days. I am tomboyish enough to appeal to teenagers, girls as well as boys, without having that super female sex symbol appeal. And I'm girly enough to be an ideal for them too."

A good analysis of the artist herself, and that is not all. "I've had a lot of response about the fact that I don't laugh on photos or during TV performances. One calls it a pose, the other an 'image', but for me it's just natural. Why would I laugh anyway? What's funny about the emptiness of the world that is offered to the 'kids' of today? Nothing at all. If they would contact me for a toothpaste ad and they'd pay me for it I would try to smile. But it's certainly not the dark prospects of our lives that would make me smile."

Kim doesn't go for glittery clothes most stars tend to use these days: tight jeans or leather pants, a simple blouse or sweater and some boots. It couldn't be more 'normal'. "Why would I have to dress differently than I've always done? I am Kim Wilde and that's who I want to present. Not some fabricated marionette, who tries to follow a trend or to answer to what the audience might expect. I'm almost certain it's this honesty that is liked by the audience so much. They say that people long for fantasy and extravagant things in times of crisis, but I know that I just long for some honesty. They have lied to us enough, they have made enormous stories about what 'life' and 'love' should be... More lies aren't necessary. And kids are happy to see someone who is not leading them on.

So who is Kim Wilde? Who hides behind this stern, sometimes angry eyes? "Kim Wilde is a simple girl of 20 years old, surrounded by a very cosy and creative family and who considers herself very lucky to have been able to make her ambitions come true", says Kim. "But I am also a realist, someone who sees the bad things on this earth, who realises that some people are having a really hard time. I don't dream of a luxury life with Rolls Royces and personnel that jumps up for me when I lift my finger. I love simple things, going out with my friends, shopping, walking in the park and reflecting on the things that have happened to me. Kim Wilde is that young thing who has feelings and many question marks on her mind. When people love me for what I a mand don't just see me as a sex symbol, I am most happy as a human and as an artist." 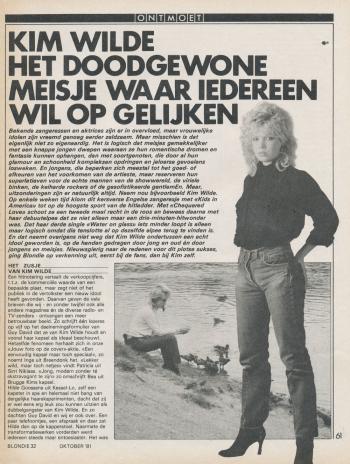 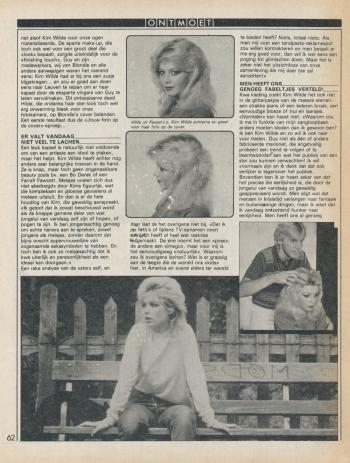 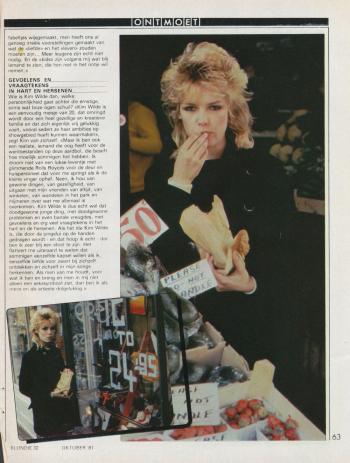