"I've been to Sydney before. Back in the early '70s, when I was 11 or 12, I came out with my father who was appearing at the clubs. We stayed at the Claremont Hotel in Kings Cross. I went down to see it the other day and it's gone. They knocked it down and put up a new building. It used to be a bit tacky though."

The pretty blonde young singer probably doesn't realise the relevance of this statement to her own career. She just gazes about her, deftly combining bewilderment and vacancy in the same expression. Someone forgot to wind up the key in her back.

Though many are increasingly turning to DIY (do-it-yourself) out of frustration, some still prefer to let others do it all for them. Take Kim Wilde: her father Marty Wilde (a minor pop star in the UK back in the late '50s) and her brother Ricky, who also produces, write all her songs; Mickie Most (who produced a swathe of hits in the late '60s and early '70s) gave them the opportunity to record on his RAK label, and Mum runs the fans club. (Uncle Bert probably cleans out the offices and possibly cousin Billy takes out the garbage.)

But it all results in Kim Wilde being a total catastrophe as an interview subject. There is one insurmountable problem: this 20-year-old hasn't done anything. She's never even sung live (if you discount accompanying mum on the occasional backing vocal for her old man's club act when she was younger). Before her mentors decided to make her a star, her life had consisted of school followed by a college arts course: the typical therapeutic curriculum for those school leavers who don't know what to do with their lives.

Face with this inspiration the reporter racks his brains and comes up with an absolute killer of a first question: how did you get started in the music business, Kim? (Floors them every time.)
"From when I was this high, Dad would get hold of me and tell me to try and sing songs which he'd written. The results were usually pretty terrible. As I got older he used to encourage me, but Dad put most of his energies into encouraging Ricky. I think he was a bit scared of a girl like me in this business. He didn't think I could be ruthless enough. But he should have realised I was a Scorpio."

This astrological obsession crops up again in her PR sheet with this statement: "I'm a Scorpio and they're incredibly passionate people... I love boys and sex is as important to me as it is to anyone else." That had the old grey matter churning for a few days. Just how important is sex to anyone else?
"I kept at singing though", she continues, "and it all took off when I left college last year. I sang backup on some demos of songs that Ricky had written and we took them to Mickie Most. Mickie liked Ricky's writing and producing and he must have thought I had a good voice or something." The something was probably the decider. "That's when he had the idea. Ricky wrote Kids in America and Mickie decided to release it with me up front."

Kim hasn't had time to think about success. Her days have been filled up with interviews, photo sessions and all the other trappings of promoting an international hit. If today's Tuesday this must be Australia, but if it's Thursday this could be South Africa, and what's Countdown anyway?

She hopes to go on the road next year. "I was worried about the time lag after the hit, but Mickie said I'll need a lot more material out before people will come and see me." Questions of manipulation provoke a strong statement on her own creativity. "I'd like to write songs. I have ideas but I shut them out because it's no use having ideas. I don't have the time. There's always another interview or photo session. I'll write songs one day. I know I can do it. I don't know how well though...."

The conversation begins to fall apart here. Topics are exhausted, pauses become longer and we look at each other with ever more embarrassment. Kids in America blares out in the background of this press reception thankfully filling up the silence. Out of desperation it is asked if there is any significance to the song's title.

"No, there wasn't any great social comment to be made in that record. The only comment I'll make about that record is that really the lyrics are very simple. The music inspired the lyrics. It's not to be taken very seriously. I've had a lot of stick about Kids In America because I haven't been there. But I don't think it really matters. I might go next year."

One idiot answer deserves another idiot question: do you think your parents' latest offspring will get into showbiz?
"I reckon it's the best way to live, being in this business. So I'll be encouraging my little brother and sister to get into it. I expect they will. It's good in England at the moment, there's lots of 20-year-olds who are big stars. My pop image doesn't worry me at all. It's great."

Kim Wilde is full of such profound statements. But the best comes from her PR sheet again. A touching little vignette, it details how she liberated her goldfish by building an outdoor pond for them. She says: "I go out and watch them swimming around. In a way, it's my little world, my escape."

From one goldfish bowl to another.... 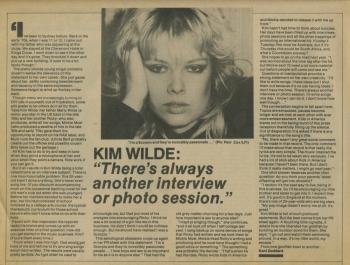