Every now and then singles pop up in the charts that are just a little less stupid and sometimes are even a lot of fun. A typical example of that was the single 'Kids in America' by Kim wilde. It sounded fine, wasn't dated and the twenty year old blonde Kim looked nice too.

"Kim Wilde" is the title of her debut album which contains both "Kids in America" and the new hit "Chequered love". Listening to the record I get the impression it was made quickly. If a little more time and effort was made to collect song material "Kim Wilde" could have been a fine record. Kim's hoarse voice is good enough to engage for two sides of a record and the accompaniment isn't spectacular but still effective. There are, however, just five strong tracks on it, including the singles, and the rest comes across too much as filler.

And that's a shame, because younger brother Ricky and father Marty write pretty good songs together. The song 'You'll never be so wrong', which has become wellknown in a version by Hot Chocolate, is an example, and also 'Everything we know' and 'Water on glass'.

I would like to hear Kim sing a song by Costello or Hiatt, because her typical voice makes me think of both men. It's no shame to record other people's songs. In the old days, before albums suddenly had to sound so individual, they didn't know any better. 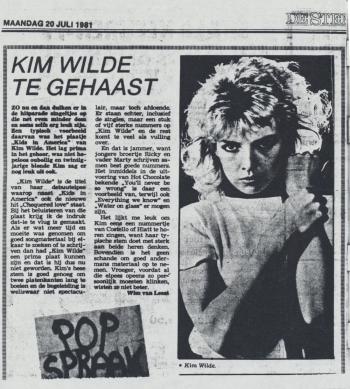