Kim Wilde, 20, in just six months, has rocketed from teenage art student to become Britain's sexiest and most successful dolly pop star without opening her shirt below the second button. On a promotional visit to Johannesburg this week, the daughter of rock-and-roller, Marty Wilde, of the 50s, revealed the secret beneath the blonde mane, the smouldering blue eyes, the sensual pout and the curvaceous body of the publicised "multi-million selling sex kitten".

Mickie Most created her image. She is not permitted to smile for photographs. Thus, the sexuality of Bardot is combined with the brooding cult-image of James Dean, the 1950s Hollywood cult hero. She cannot show cleavage, and the thrust of her curves must be covered to the throat to focus attention on the desire she projects from her eyes and lips. "It's all a bit of a joke, being marketed like this", she said. "My friends and my family send me up rotten about it - 'here comes the sex-pot' and 'Oops! Look out for old animal eyes.'

'The only boy friend I have is a guy I've known since I was 12. I live at home. My closest mates are the half-a-dozen girl friends that I share all of these new experiences of pop-stardom with.'

Her first record, "Kids in America", was released at the end of January. It raced up the charts in Europe, South Africa, Australia and Japan - selling over the million mark. Her second single, "Chequered love", is close to a million seller.

"My dad looks after me ver yclosely and my young brother, Rick, writes my songs with him", Kim said. "My mum, who was also in showbusiness before she married, does the accounts. As for being a sex-kitten, forget it! The way I look and the way I'm being trained to present myself is just party of making hit records, like getting the right notes." 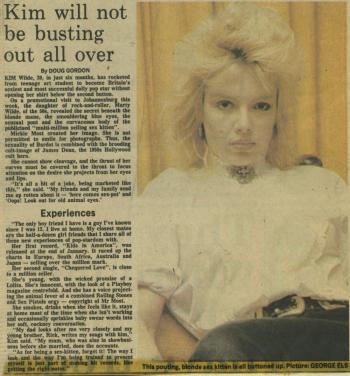 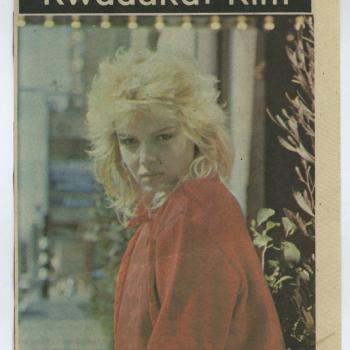 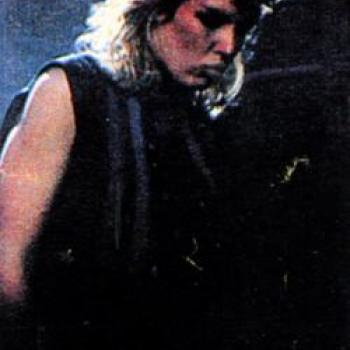