It was a secret for a long time, but now it is confirmed: Kim Wilde is in love! It's a pity for all her male fans, but she has lost her heart to the bassplayer of the group Tenpole Tudor, Dick Crippen. We were wondering why she kept saying 'Wunderbar' to everyone while we visited her English studio, but that's obvious now: it's the title of Tenpole Tudor's new single! 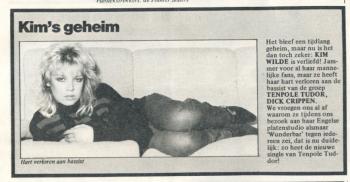