A record has been released which could launch a 20-year-old Tewin girl on a high-flying career in show business.

It is a dream of many youngsters to have a chartbusting success. But for Kim Wilde the odds must be shorter than most. Her father is Marty Wilde, one of Britain's biggest rock 'n' roll stars of the '50s and still much in demand as a performer. And with her brother Ricky, also in the music business, she has a promising background.

But, of course, it is the vital first record which counts. And with 'Kids in America', Kim's family, friends - and producer Mickie Most - believe she is on to a winner.

Said her mother, Mrs Joyce Wilde, this week: "So far it is doing very well and we are all keeping our fingers crossed."

Kim was educated at Presdales School, Ware, went on to study art in St. Albans and planned until recently to go on to university. But, said her mother, singing had always been her first love, and now her career had started she was planning to make a video, make television appearances in Germany and, of course, do a follow-up record.

'Kids in America' was co-written for Kim by her father and brother, and if it "takes off", the next step will be to form a band around her. Her record has already been played several times on Radio One.

Said her mother: "It is all very exciting. Mickie Most has a lot of faith in Kim and we are thrilled the record has started to do so well."

Marty Wilde, who with his family has been "local" for some years, is to make his first appearance in Hertford next month. The "Marty Wilde Rock 'n' Roll Show" will be presented at the Castle Hall on Friday, March 20. 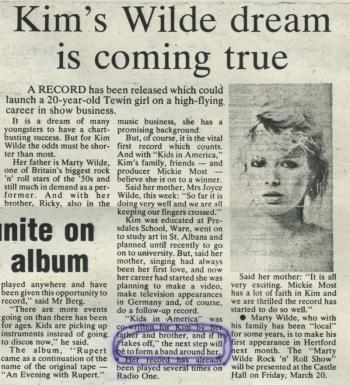