She is twenty years young, has a cheeky face, accentuated by short blonde hair, and it looks like she's the sensation in the pop world: Kim Wilde, the English singer who had a remarkably successful start with her debut single 'Kids in America'. Kim has gone through the ups and downs of showbiz ever since she was a cheeky toddler.

Kim's father is Marty Wilde, who - at the same age as his daughter now - had already made some successful records. With his band The Wild Cats Marty Wilde became a much sought after artist with hits like 'It's been nice', 'Endless sleep', 'Donna' and 'Bad boy', which was written by himself. With the song 'Abergavenny' Marty had another hit in the Benelux and he played in the movie from the musical 'Bye bye birdie', which also starred David Essex.

'I grew up in a house full of music', says Kim with a remarkably soft and melodious voice. 'Almost everyone knows my father, but nobody knows that my mum used to dance with her Vernons Girls and that my brother Ricky plays guitar and synths very well. Ricky, who is also becoming a producer, wrote 'Kids in America' with my father. As a young girl I watched from behind the curtains, when my father was performing. I learned the trade that way, and I really do know what's happening in this world', she says seriously.

'I've seen all the highs and lows of my father's career from up close. At home there was much talk about the show business. I am aware that singing is a very tough job, in which there is a lot of hard work to do.'

Despite all this knowledge you took the job?
'Yes! It is a tough job, but it is fascinating as well. It went quite easily. I was at art college. Sometimes my brother asked me to sing on a demo. Last year, while I was singing backing vocals, famous English producer Mickey Most was there. He saw so much possibilities in my voice that he wanted to make a single with me as quickly as possible.'

Ricky and her father wrote the song 'Kids in America' quickly. The demo was soon made. The record was quickly recorded and mixed. It went up the charts very quickly. 'That's the way I like pop music. It has to be like that: write a good song, sing it, and go on with the next before you have time to think about it.'

Marty Wilde, who talked to his daughter about the dangers of the trade, is very proud of his daughter. 'When Kim started, I was optimistic', he says. 'Now I am amazed. She will have more success than I ever had. Kim is down to earth about her success. 'Because of that hit I am a happy person. I love this job, but I'm not too serious about it, because there is a chance that I'll go crazy.' 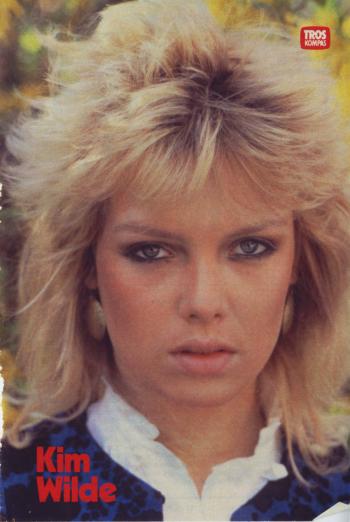 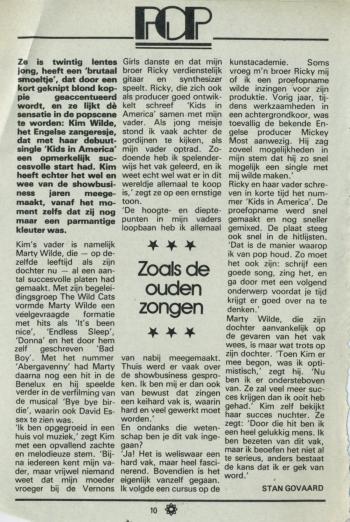