Her jeans are so tight you expect to see her skin on the outside. What she has is no secret and her tumult of blonde hair is done in semi-punk style. The big grey-blue eyes have a bold defiance, almost a threat.
And Kim Wilde says it herself: "I'm tough. But not the sort of toughness that makes the walk over people. I couldn't do that. Believe me though, in some ways I'm ruthless."
She is wearing under a blue gauzey top a loose white T-shirt which makes it obvious points and she teeters along in black cowboy boots, everything giving off sexy signals. Then when she softly calls Marty Wilde "dad" in a small respectful voice the whole image breaks down to that of a young girl reaching out and knowing that someone is there.
Kim Wilde, 20, has just had her first chart-topping record Kids In America, following in the footsteps of her dear old dad, that revered elder statesman of rock 'n' roll, Marty Wilde.

And Marty, at 41, doesn't like being tagged as an ageing rock 'n' roll singer. "I can do without comments like that. I've had them and I don't want them."
So this interview, they said, would be the end of the line for the Kim-daughter-of-Marty (you remember Marty Wilde) image.
"She's going to make it on her own", said Marty, tall, lean, tanned and looking in great shape for someone who has spent a lifetime in a business which can wreck you in a day.
Kim, sitting by dad in the car, directs him to the restaurant, saying, "Left here, dad", then lips off a rock 'n' roll riff out of nowhere "doo-wah doo-wah". Marty says okay and gives an answering blast of "doo-wah doo-wah".

I figure right away that we have here a social phenomenon, folks. You know, the second rock 'n' roll generation who get the beat straigt from the ever-lovin' rockin' cradle. Doo-wah. Doo-wah. Shoobydoobydoo.

Kim, who displayed the splendid uninhibited and enthusiastic appetite of an overworked and starving navvy, licking her knife clean every couple of minutes said: "I can't say I have any great burning ambition. I take each day as it comes. I don't plan anything. I love being at home with mum and dad and the family, especially my kid sister. I'm not the type who longs to get away from home because I love it too much. Lots of girls my age can't wait to get away on their own but not me. I think that's an adult outlook and anyway to get along with sisters and brothers and parents you have to be able to adapt, make allowances, understand people. Right?"
Marty and his nineteen-year-old son Ricky wrote Kim's hit song and Marty sees his songwriting as a logical extension to his singing career, though he still goes out on tour.

Marty wears a black shirt and a big gold nameplate round his neck to remind himself who he is. He fingers the real leather menu holders of the ritzy restaurant which is packed with overweight, high bloodpressure guzzling business types.
"Hey look at this, Kim", he says to his scrumptious daughter. "These would be just the thing for keeping my lyric manuscripts in. How about stealing me one?"
Kim says they're truly beautiful, real leather. They're a couple of great kidders and between them it is easy to detect a folksy, chummy bond, relaxed, true friends. Nice to see when so many dads and kids are snarling at each other across the so-called generation gap.
"Listen", says Kim emptying the last of her half bottle of wine and accepting a glass out of mine, "whatever you do, don't write any of that stuff about A Walk On The Wilde Side or The Wilde Bunch. You know what I mean? We've had too much of that, haven't we dad?"
"Yeah", says Marty who doesn't smile much, "and I don't want to be called an old rock 'n' roll man who's past it."
I rapidly and with feeling assure them both that I'll tell it like it is.
"You know", says Kim, "no cliches".
Right I say, cliches make me sick as a parrot anyway.
"Kim is going to eclipse my success forty, fifty times over", says Marty. "She is going to make me look like nothing at all. When she first started out I was cautiously optimistic and now I'm stunned. Stunned."
"You know", says Kim, "I haven't appeared before a live audience yet. That's my immediate ambition, that feeling of getting through to people and the way they respond. Boy friends? No. No one in particular and I'm keeping pretty busy."

Had dad marked her card, pointed out the tank traps and minefields of a very rough business?
Says Marty, "She's not the sort of girl you can TELL, I can suggest and then it's up to her. But I've described the hard drugs and the booze which has wiped out so many of my colleagues. I had to beat the booze problem myself.
Kim listens to her dad and then says: "Like the song says, I get no kick from cocaine, not that I've ever tried it. But no. I stay out of trouble."
This spectacularly beautiful girl looks life straight in the eye and doesn't necessarily like everything she sees there. For twenty, she's going on middle aged and wise.
"I've always appreciated having a good home and being provided for and getting most things I wanted. Some people get a complex about having too much, some get a complex about having too little. Not me. And listen, I always remember something I read once - if you get everything you want in this life you might not want everything you get."

Close up, this girl has a skin like a flawless Golden Delicious. And she has fine, generous promising, slightly overripe lips as lush as the strawberries she was shovelling down. Was she going to invade America?
Her small, neat and nervous PR man across the table leaps in. "Mickie Most (her manager) plans to take her over there to show her around."
This is news to Kim who registers it with one of her bunsen burner glances at the midget PR man.
Back at Mickie Most's office after lunch, the walls are sequinned with corner to corner gold and platinum discs which shame the sun dazzling through the tall windows. Mickie plays a blast from Kim's follow-up record and Marty higgles around and then approves.
The pocket-sized PR man scuttles in, gasping out the news that offers are streaming in for Kim from all corners of the globe. "There's even one from Charles Aznavour".

Kim greets all this with the announcement that she's going off down Oxford Street to do some shopping. Marty looks at her as she goes out. "I know what she's doing. She's going off to buy me a present. It's my birthday tomorrow. Rock 'n' roll has been good to me. Life has been one long paid holiday. I want that for Kim."
Mickie gives us another broadside of Kim's disc and the gold and platinum records on the wall shudder and dance in the sun-filled room. 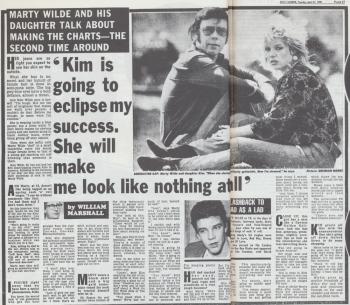