On December 17 she presents her new song 'Cambodia' in Musikladen: Kim Wilde

Why do you suddenly sing a deep dramatic song like "Cambodia"?
My fathe rwrote the lyrics months ago. It was meant for inclusion on my second album. But we thought it was so good, that we released it as a single.

How did your father come up with Cambodia of all places?
He is very interested in politics and world history, reads a lot of papers and is always informed of the latest news - quite contrary to me. What I know, I know from him. He is also the one who stimulates me to get to know more.

What is the lyric of 'Cambodia' about?
It's about a wife of an American pilot, who ends up being killed in the Cambodian war. The lyric was originally written in the first person. But while I could really identify with the woman in question, I have changed it, so that I now sing it in third person.

What particularly binds you at this song, and do you still have the final say over what you sing?
I absolutely have the final word. What I like about 'Cambodia' is especially the dramatic atmosphere, which lies close to me personally. With that I can finally prove that I can also sing in a different style.

In germany we haven't heard from you since your last TV performances. What did you do in the mean time?
I was busy promoting my singles "Chequered love" and "Kids in America" in other countries. For this goal I visited amongst others Rome, Milan, Paris, Stockholm. In Copenhagen alone appeared more than 100 journalists, who bombarded me with questions. Fundamentally the past year was very hectic for me. That's why I think I have earned the last four weeks, in which I have had more free time. Despite this I was regularly in London in the recording studio, to make the new album with my father and my brother.

When will the new LP be released, and what songs are on there?
Of course "Cambodia" will be on it. Also I will release a few self written songs on it.

Do you already have a few in the box in the meantime?
No. But a few years ago, just before we recorded "Kids in America", I wrote a lyric, which I am very proud of still. It's about deep personal things happening with my friends. My father liked it, but at the time it was simply too early for me, to put this drama on my fans. Maybe it can be used for the new album.

Do you compose your songs on a piano, a synthesizer or on the guitar?
On piano. I play it best. I have to learn more to play the guitar. Ricky is busy enough with the synthesizer. He is running around the house every day, trying to find new sounds. My ears are already ringing because of that.

Is it right, that you will soon leave England and wants to move to Munich? Your father said this in an interview...
No, I will never leave England. My father means that England is expensive for people who make money because of its tax laws.

At November 18 you turned 21. Has something changed for you because of that?
No, you don't become an adult from one day to the next. But I had a great birthday party. With over 200 friends I have celebrated it at Knebworth Banquet Hall in Hertfordshire.

Do you still not have a boyfriend?
No. the difficulty is, that I see through boyfriends that are acting like they are in love. The are impressed by me, find me great. But love is something else, something more deep and mature. That feeling I have missed out on until now. Boyfriends usually belong to my closer circle of friends after a short romance. For example I have invited all my exes to my party...

What band played there?
A few friends from different bands have played live for me. I have sung some songs with my parents.

What future plans do you have for next year?
I would like to go on tour as soon as possible and play live. I will first have to get a band together. Also I would like to promote my singles in America. That fascinating country I would like to discover as a singer. 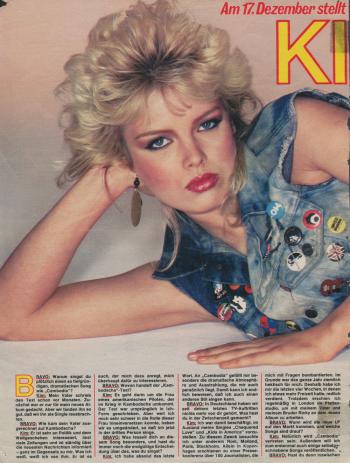 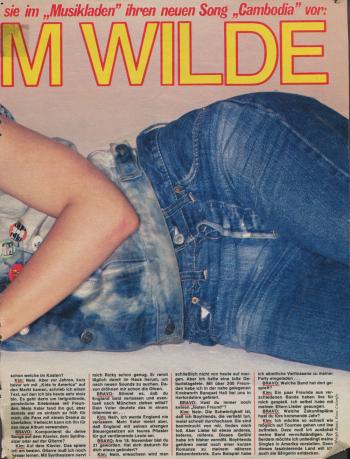