On the Wilde side

She's tall, blonde, beautiful, and at just twenty Kim Wilde doesn't need reminding that she's had an easy ride to the top.

A year ago Kim was still at art school and not really thinking of becoming a chart-topping sensation. her father, 50's rocker Marty Wilde, was still on the cabaret circuit, her younger brother Ricky - who had a breif and excruciatingly awful career as a teenybopper several years ago - was busy writing songs to the hope of getting another record contract.

Kim's best chance of following them into the pop world seemed to be doing a few 'oohs' and 'whoah-yeahs' as Ricky's backing vocalist. But when they took some demos into Mickie Most's RAK Records, the label that has launched such pure pop hits as Hot Chocolate, Suzi Quatro, Mud and Racey, they found Mickie less interested in Ricky than in Kim.

'I'm gonna make you a star', said Mickie, or words to that effect and Kim's parents - her mother Joyce used to be one of TV's dancing Vernons Girls - negotiated a three-year contract which Kim sort of read. 'I didn't really get very far 'cause there weren't any full stops or anything and I kept running out of breath. I think there's something about three singles and an album each year.' Two of this year's singles have come out already, 'Kids in America' which reached number two early in April, and 'Chequered love' which is in the charts now and doing just as well.

Ricky writes the tunes and Marty sticks on some punchy lyrics interspersed with 'babes' and 'na-na-na-na-nas' and featuring, in the case of the first single, a place called East California which doesn't exist. Ricky's production in rocky and hard, a bit like Blondie when they're on fom and  the result has been two purely old-fashioned pop hits.

Kim meanwhile remains remarkably unspoilt by her success. She ives at home in Hertforshire and when she's not working, helps look after the younger half of the family, 18-month-old Roxanne and Marty junior who arrived in April.  She shares a VW Beetle with Ricky and describes herself as anything but a raver. 'I really ge ttired easily. I love our house in  the country and when I have a few days off I like just sitting in the sun and going for walks. I like getting out on my own, perhaps doing a bit of shopping. I'm not 'fashion conscious'. I don't believe in spending lots of money on clothes. I'm basically cruffy and have a sort of rough and ready look that's pretty untogether, but definitely uncontrived.'

All the indictions point to a long and hugely successful career for this young singer. In Mickie Most she has a superb manager and one who knows how to pace his protegee's rise. 'She hasn't done a tour yet because there's no need to, not ntil the end of the year', he explains. Most likes to preserve what he calls the singer's scarcity value, just as Col. Tom Parker did with Elvis Presley. 'Kim will be around for a long time', he says, 'there's no need for her to rush out on the road until she's ready.'

The first album is in the can, but won't be released for a couple of months. So most of Kim's time now is spent promoting the singles, which have proved as popular on the Cotinenet as they are over here. When I met her she'd just been give nan article in a German magazine that called her the 'Brigitte Bardot of pop'. 'Gawd', she exlaimed. Fortunately she enjoys doing television - and comes across well on it, often looking stunning rather than just attractive.

The radio stations love her and the popular press loves her ('Curvy Kim Wilde', panted the Daily Star, 'is rocking her way up the pop charts even faster than her famous father Marty did when he was Britain's no. one heart-throb in the fifties.')  She's certainly destined for the top and it couldn't happen to a more likeable person. 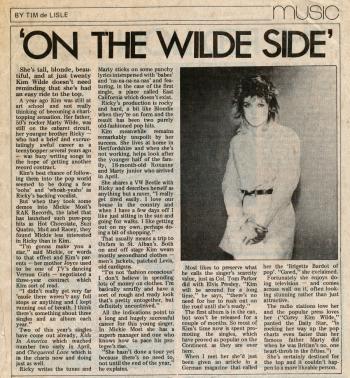