One of the Wilde bunch

Kim Wilde runs her fingers through her choppy blonde mane and muses about fame. "I was in McDonalds the other night", she says, "having a lonely hamburger, and people kept coming back and staring through the glass. It was really strange..."

You feel inclined to point out it wasn't. After all, she is a striking looking girl, a singer ni the star mould of the likes of Debbie Harry and Hazel O'Connor and daughter of that rocker of yesteryear, Marty Wilde.

Being ogled at - especially with a single like "Kids in America" riding at No 6 in the charts - is a fact of life. The more so when you're a girl who's put together her own eye-catching and original Deliberately Different Look.

When it comes to clothes, there's no New Wave or New Romantic stuff for 20-year-old Kim, who showed her style when she made her TV debut in a £2.50 coat from Oxfam, and who turned up for a shopping spree with Express Woman in a navy school mac (Oxfam again and just £1), black canvas jeans and an old M&S lambswool cardi, teamed with suede stiletto bootees.

Says Kim, who lives at home with father Marty and mother Joyce, a one-time Vernon Girl: "I want my own image. I'm not fashion conscious, I don't believe in spending lots of money on clothes and I mostly shop at the Oxfam shop in St. Albans. I'm basically scruffy and have a sort of rough and ready look that's pretty untogether but definitely uncontrived. Scatty really, which is the way I am."

Our shopping spree took in the King's Road, World's End, and Covent Garden... with the Wilde One giving the thumbs down to the likes of frothy netting tu-tus and provocative stripey minis ("good fun clothes... but too tarty and jokey for me") and approval to the chunky sweaters and tuxedos at Flip, haven of the authentic cast-off ("I think the fifties are an influence on my style").

"Dad still has a lot of his original stage clothes", she says, "I've been right through hit wardrobe but everything's miles too big. I'd wear them if I could have them altered. And I wish mum had have kept her old Vernon Girl gear, I'd have worn them too."

That said, Kim ("My vitals are 34-25-36, I think") settles for a £4.50 black tuxedo from Oxfam and patched Levi 501s as her favourite clothes, and declares: "I always wear tight fitting trousers, mainly jeans".

And of following in father's footsteps (Marty and her brother Ricky co-wrote and produced her No. 6 hit), Kim says: "I love this business. But it's just a job isn't it. I don't have any clear-cut plans for the future."aily Express (UK), March 23, 1981 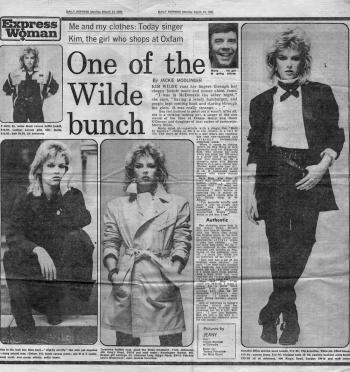