The phone interview, or phoner, is a valuable tool in every record company's promotional armoury. It's an efficient and business like technique for getting the greatest possible coverage with the least movement of the artist concerned. It has its advantages and its disadvantages. With somebody you've never met it can be hard to establish a rapport. And if the interview is one of a series, you can end up getting exactly the same information and comments as a dozen other magazines. But in an increasingly global rock community sometimes it's the only way to keep in touch. So hit that record button Jasper and let's go!

Form: Released first single, 'Kids in America' in January 1981. Went to no. 2 in the U.K. Song written by brother Ricky (19) and father Marty, a pop star of the sixties ('Abergavenny' et al.) Released on RAK Records, label of pop maestro Micky Most (producer of Animals, Hermans Hermits, Nashville Teens, Lulu, Donovan, Suzi Quatro, Mud and Smokie). 'Kids in America' currently top five in Australia. Follow up in U.K. 'Chequered love' peaked at four on the charts.

Miscellany: Age 20. Star sign Scorpio. Spent a year at art college. Paul Morley of the N.M.E. called her the 'best pop star of the eighties could produce'. He also said her album, 'Kim Wilde' was, 'a true masterpiece of fake ranting, stunning guitar tiffing, suggestive trembling and pop flashin'...'

Hi, how are you?
Fine thanks.

Um, how long are you spending out here? Is it a rushed visit or...
I'm going off to um, Africa on um, Saturday.

Africa? Why are you going there?
Well, 'Kids in America' is a hit there.

Oh really. Which countries?
Well, I think we'll be based in Johannesburg. I think so anyway. I haven't seen the itinerary yet.

Is it all a bit hectic?
At the moment yeah (she laughs).

It's all been a bit hectic from the word go, I guess. When was 'Kids in America' a hit in England?
It was released on 26th January I think.

Right.
And 'Chequered Love' was released in May.

And they were both fairly large hits there?
'Kids' got to 2 and 'Chequered love' got to 4.

Right (impressed). It's a great way for your first two singles to go.
Yeah (girlish giggle).

Well, how long er... I don't know a lot about your background. I do remember some of Marty Wilde's songs back in the sixties. 'Abergavenny' and things like that.
Mmmmm.

How much is the album and the two singles from it, a family thing?
Well, um, Ricky produced the album. He co-writes wth Dad. Um, my business manager is my Mum, um, so I suppose it's fairly tied up in the family.

Are you a close family?
Yes, we are (emphatically).

The song 'Kids in America' - it almost seems a strange song for an English person to have written. Do you know what I mean?
Yeah.

have you any idea why it was written? Were you around?
Well, er, Ricky just had this tile. That's all he had. But he had the song - he had the tune.

Yeah.
The tune was like very fast, had a lot of energy. It really went.

Hmmm.
And it was like, the idea of kids in America. The two things really seemed to need each other. And he presented the title to Dad ,who elaborated on it in his own fashion.

Do you think there's anythnig in the song from... has your father been to America recently, or does he go there...
He has been there. I don't think it was based on anything that is currently happening there. It wasn't any great political statement.

No.
Or social comment by any stretch of the imagination. It's a load of ideas. I mean even if you haven't been there you can gain quite strong impressions of America.

It's very hard to avoid it.
Hmmm. Particularly in England. They're not always right you know. The song wasn't written in a terribly serious vein. We weren't all sitting there holding our heads. We were having a good time in the studio.

Obviously being in a musical family, you must have been aware of music from a fairly early age. Do you have any particular people who you really liked, in the past?
Oh, in the past...

As far back as you like to go really.
I remember the Beatles and Cilla Black and Gene Pitney.

Right.
And I like the Kinks, but I only have vague emories of their music.

Was tha tthrogh watching the tele or meeting those people or...
I never met them, no. Just the radio. I've always listened to the radio. And then, when I was growing up, at school, I used to like Gary Glitter a lot (shy laugh). And then, more recently I supposed I've been very intrigued by the great lady singers - Aretha Franklin, Joni Mitchell and Connie Francis. I think she's pretty good.

Connie Francis - there's a name from the past.
Yeah (full laugh). Any great girl singers, they're obviously gonna influence me. On the male side, I like Elvis Costello, Lou Reed, David Bowie (said in a rush), um, I like a lot of the new English bands like Psychedelic Furs.

Yeah, they're great.
And Tenpole Tudor of course. Who I notice you didn't give such a hot review to when I read your latest issue te other day. (Reprimandingly.)

No, I um (blushing)... I really liked him in 'Rock 'n' Roll Swindle' - I thought he was fantastic. Did you see that film?
No. I didn't ever get to see the film.

It's really worth seeing I think.
Have you heard the album?

Oh no, I haven't listened to that.
Oh well, you've gotta listen to that you see. Now that's a bit of a good album for you.

Is it?
Yeah, it's great. I mean it's not terribly ingenious. It's just great music. I love it. Anyway, anyway.

Can you tell me a bit about Mickie Most? I mean he's a name that's been around for years and years, what was he like to you?
Well he's er, he's very positive. He's very evasive...

Evasive?
Aloof - you can hardly talk to him... he keeps you at arms length. But he's very straightforward, and he looks you in the eye when he talks to you. You know he means what he says.

Yeah.
I was a little bit scared of him when I first met him because he used to run this TV show in England called 'Small Faces', um, 'Small Faces'? Was it called 'New Faces' (she laughs). New talent goes on and he sits there and judges them and he's got a bit of an ogre image.

Sort of like a Svengali?
Yeah. But he's great. He's a fantastic guy. He doesn't bullshit you know, and I respect people who don't bullshit.

Yeah, I'm just glancing through your bio here, um, you went to art school...
Oh yeah, I went there for a year.

It seems like a lot of English musicians spend some time at art school. Why do you think that is?
Art college in England... people are very serious about art colleges there you know. Um, they have a lot of intrigue about them - most people would really like to go to one - anyone who's got any kind of creativity in them anyway. And I suppose that's what it's all got down to - people creating something, if they can't do it one way , they'll do it another... music is as important as art there.

What were you actually doing there?
I was drawing and painting.

Do you still paint? do you find the time?
I don't have any time to paint. I do sketches sometimes. But most of the time if I'm not doing anything I just want to kip. (We laugh)

Are you finding it hard to handle the kind of success you're having?
I'm not finding it that hard but I think it'll be a lot easier in a couple of years time. I dunno really. I can't see into the future too uch. I find it pretty scary. I prefer to think day to day.

You haven't actually played any live concerts yet, but I've read that you will be early next year. Why the delay?
I wanna go on the road. I wanna do gigs. As it happened, when I went to RAK, I wasn't a band, I was a singer. Ricky was a songwriter. We didn't have a band. And we haven't had a woking band since we signed up. And, er, there's been so much promoting, abroad and that. Germany, Holland, places like that. France. Establishing me as a singer. And Ricky wants to concentrate on his writing for the time being. Although he will be in the band.

When you do go out live are there any old songs you'd like to do?
I love 'Who's sorry now', Connie Francis.

Oh, yeah.
Um, I don't know you see. I'd love to do that song but I don't know how it'd go down with the punters (she laughs). I'd like to do 'My baby left me' by Elvis Presley. That'd be quite novel I suppose.

Anyone else? Anyone more contemporary?
Um, um...

What about an Elvis Costello song or something?
Maybe. I'd like a more soul sort of song. I went to see him at Hammersmith not so long ago, and he did Randy Crawford's 'One day I'll fly away'.

Oh, really?
He did a great version of that song. And I would like to do a version too. No-one expected him to do it. I'd like to do a Phil Spector Sound song too.

Right.
Like 'When the boy's happy' or something. Do you know that?

I don't think I do.
I think it was by the Four Pennies or something. It's real cute you know. I like cute songs. (Laughs). As well as other kinds of songs.

Do you do any songwriting yourself?
Songwriting's something that's always eluded me. I've always wanted to do it, but I've always hated everything I've ever come up with. I keep a cassette of ideas and I hope one day some of them will get together. I've always written words.

Do you play an instrument?
I play the piano and guitar. It's something I want to get into, but I have to get myself together before I start songwriting.

I will.
It's not too serious. Just the way he sings is very very clever. And you wouldn't believe it really. Eddie Tenpole Tudor singing. 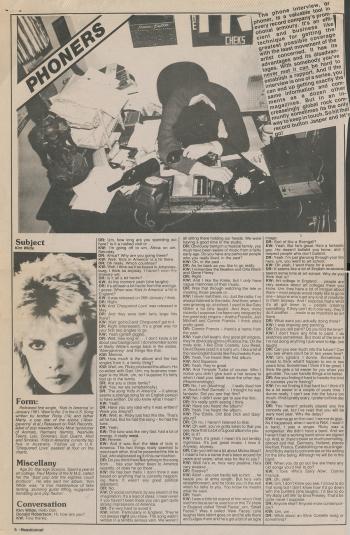