Kim Wilde (20) beats like a bomb! After "Kids in America", she landed with "Chequered Love" a giant hit. In the interview, Kim betrayed what hides behind her cool mask ...

You are the daughter of the rock singer Marty Wilde, known in the 1950s. Did that help you with your lightning career?
I do not believe that it is irgenjemand impressed to have a well-known father. You are rather spoiled, spoiled, untalented and slightly stupid - and in many children of successful musicians it is true. That I now rauskomme as a singer, I only owe a coincidence ...

How did you actually get discovered?
My brother Ricky (19), who wrote the two hits "Kids of America" and "Checkered Love", wanted to start as a singer himself. He recorded a few songs six months ago, and I sang the second voice. He then went to producer Mickie Most, who discovered Suzi Quatro, Smokie, Sweet and many other top stars, and played the tapes for him. Mickie most liked my voice right away, and he wanted to see me. Well, so it all started. Mickie told me that I had the stuff of a great career, but I was rather skeptical.

Does your brother now feel tricked out of you?
No, goose and not at all. This is perhaps hard to believe, but our family is incredibly liberal and fair. Ricky now writes most songs for me and will be the boss of my band. He is overjoyed that I have made it. We are working together now on a career.

Your songs sound punky. Do you feel like a New Wave singer?
No, with punk I have nothing in mind. I totally missed the whole point of the punks, because I had a firm friend back then and did not look after me. I also do not think my songs sound punk. They are less polished than other hits and have a certain "do it yourself" character - but that's exactly what I find charming.
It corresponds to my nature. For example, I wear only clothes from second-hand shops or wear old men's clothes from my brother or father. I could never be a glitter star. I love edges and corners in music as well as people. I hate everything. "Kids in America" I have sung in one piece during the recording. Most of the time singers record verse by verse to sing as perfectly as possible.

When did you start singing?
My father still plays regularly in smaller clubs, and together with my mother Joyce, who was once also a singer, I sang the background voices. Schubidua, Schibididuuh and so. I also learned a lot about the business of doing business. I have experience with the stage, and I know what's going on behind the scenes.

They call you the "Bardot of Rock". Do you like this title?
For this I must first explain how it came to this. I bought a t-shirt with a printed girl's head in Paris a few months ago. I did not realize it was a picture of Brigitte Bardot. I liked the T-shirt and often used it in interviews and in TV studios - and I was then asked whether I wanted to become a kind of bardot or whether I would be enthusiastic about it. Well, that's how it came to this title. Newcomers always try to compare them with someone. And to be compared with Brigitte Bardot is not the worst. I am, however, more inclined to Greta Garbo.
In interviews, you often said you had something against a sexy image ...
In any case, I do nothing to be regarded as a dumb blonde. I laugh at photos rarely because I do not like to artificially posing. In short, a journalist has written, I always look as if I have not had anything to eat for days. So what do I find weird funny!

You have scored two big hits in succession. How long do you spend your career?
You can never know. I take my career very seriously and work hard on it. How quickly success can turn into failure, I have seen my father. He always had enough money and could always perform, but the time at the top was very short.

What have you done so far?
I finished the secondary school (middle school) and then I went to an art school in St. Albans. Drawings in the style of Impressionism are my great passion. I still wear a lot today, mostly with coal. My motives are mostly people, who happened to meet me and impressed me.

Did you stop with the art school because of your career?
No, I had already stopped before. I was frustrated with the fact that as a female artist she was totally put into the corner. The teachers, who are exclusively male, spend most of their time looking after the male students. The few girls who gave it at the school are simply not taken seriously. I'm not an emperor, but I could go up the walls.

What kind of music do you like privately?
Through the garden. I listen to Abba, Elvis Costello, Elvis Presley, Reggae, Brian Eno, Joni Mitchell and also Classical. I play some piano and my favorite piece is "Prelude" by Chopin. My absolute favorite group is Police. I even pretended that my little sister, who is now two years old, was named 'Roxanne' after the police hit.

You are 20 years old and still live at home. Do not you want to put yourself on your own?
Not at all. I feel comfortable in our house in Hertfordshire, where I live with my parents, my brother Ricky, Roxanne and our three-month-old baby Marty jr. Mama takes care of the shops, the rest makes music. With us the whole day is uncanny life in the shack. The only problem is that Hertfordshire is two car trips away from London and that now the many driving with my old Minicooper is a bit annoying.

Are you in love right now?
No. I had a strong relationship, but that's two years ago. Now I really did not have time, I'm on the road every day. As I said, I do not take myself too seriously, but I do not take my job. For my first LP, I even wrote a song called "The Turn of the Tide". These are completely new things for me, which totally take advantage of me.

Do not you have any friends besides the family?
But I've been in a clique of ten incredibly nice people since my studies, with whom I am now as close as possible in contact. Recently, I invited all to us and cooked for all. Japanese Koi fish. Cooking is a hobby of mine.

What else do you do in your private life?
Besides painting and cooking I like to read and watch my goldfish, for which I have myself built a small pond. Observing is my passion at all. I can sit at McDonalds for hours and just look at people.

Are not you immediately recognized?
Often people look at me somehow funny. But I do not react at all, and then they think I would not have been. Who expects a Rocksängerin in the McDonalds?

You look terribly normal in your views. How do you see yourself?
I am normal. Why do you have to be extravagant and freaked out as a rock star? I am a normal young girl who had a happy, normal childhood. Through my father, I have been introduced step by step into the show shop - so I will not be overwhelming. Perhaps I have only one thing: politics is an abomination to me. I prefer my goldfish as a politician ...

Last question: When will you see you live on the stage with your own show?
Unfortunately only next year. I'm just about to make a band with my brother Ricky. My father warns me to go on a tour. But it bothers me annoyingly that I have so far only in TV shows occurred and mimte only for the playback. I'm burning up to finally be live on the stage! 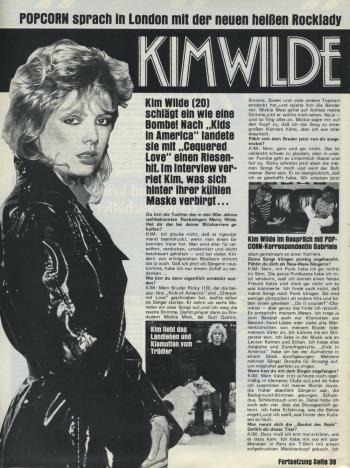 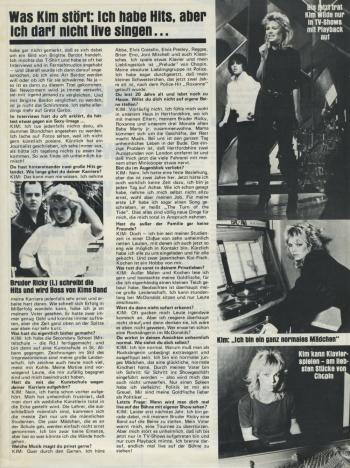