After three sublime hit singles comes the lovely Kim's sublime album. What a discovery for 1981! Just when it seemed as though no new superstar solo lady was going to emerge for ages, along comes Kim with a magnificent record like this. And no-one knows too much about her, do they, except that she's ancient rocker Marty Wilde's daughter, and that she's just about twenty years old. Seems she was at art college until last year, and being a singer had never really occurred to her until her brother Ricky (an unsuccessful record maker himself) decided to try Kim singing some of the songs he had written. Shazam! Hit followed hit, and both Kim and Ricky had suddenly discovered what they should be doing. In Germany, she's already known as the Brigitte Bardot of rock, which can't be bad, and the lovely lady already seems to have a star boy friend in Tenpole Tudor guitar man Bob Kingston. We can't make up our minds what should be the next single to follow the three hits which are on the album - there's a good many to choose from! 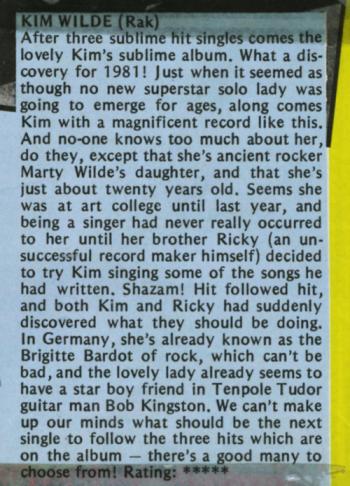