Judging by the success of the single 'Kids in America', Kim Wilde's self-titled debut album is bound to be a winner. This pretty young lady from England was a virtual unknown before that smash hit, but now thankfully she's riding the crest of a newfound popularity, and the album certainly delivers what 'Kids in America' promised.

Apart from that song, her new single 'Chequered Love' is also included and as it races up the charts, so too will the album. There are some excellent tracks on 'Kim Wilde', and from the opening rocker 'Water on glass' to the eerie 'Tuning in tuning on' the lady displays all her talents.

That first track is reminiscent of some of the early 60s rock, and with little wonder. Kim's father Marty, a rocker from way back when, co-wrote 'Water on glass'. In fact dear old dad  co-wrote nine of the album's 10 tracks - including both singles.

One of the best tracks 'Our town' reminds me in some ways of Simon & Garfunkel's 'Our little town' in that it talks of the stagnation and decay of the old home town. 'Our town' is one of the album's slower tracks, and if you thought Kim was only limited to singing uptempo numbers like the two singles, then you'll be pleasantly surprised. The standout track on side 2 apart from 'Chequered love' that is, is 2-6-5-8-0 which features some tight rhythm and excellent vocal work from the lady.

And the next track 'You'll never be so wrong' is different again. This one is another slowie: a love song more than anything else, sung with feeling and warmth. But that's the whole story of Kim Wilde - both the album and the singer - versatility. Grab a copy of 'Kim Wilde'. It's well worth it. (Released thru EMI). 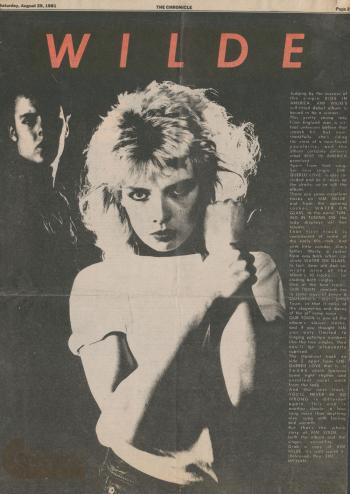